The Solar System Is Full Of 'Rogue' Asteroids 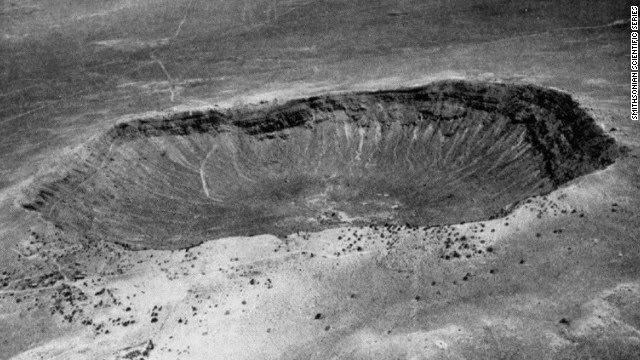 Asteroids have hit Earth many times. It's hard to get an exact count because erosion has wiped away much of the evidence. The mile-wide Meteor Crater in Arizona, seen above, was created by a small asteroid that hit about 50,000 years ago, NASA says. Other famous impact craters on Earth include Manicouagan in Quebec, Canada; Sudbury in Ontario, Canada; Ries Crater in Germany, and Chicxulub on the Yucatan coast in Mexico.

A study in the journal Nature throws a new light on this strip of our solar system, where most of the asteroids in our solar system reside. Whereas scientists once believed that these asteroids formed more or less in place, new modeling suggests they have been scattered all over.
Scientists believe "the asteroid belt is a melting pot of bodies that formed all over the solar system," said Francesca DeMeo, lead study author and an astronomer at the Harvard Smithsonian Center for Astrophysics.
Back in the 1980s, when only about 10,000 asteroids were known, it seemed that asteroids that appeared to have formed in a cold environment were farther away from the sun, while those that formed in a hot environment were closer to the sun.

But DeMeo and co-author Benoit Carry of the Paris Observatory studied hundreds of thousands of asteroids and they found that this trend did not hold. Instead they spotted many "rogue" asteroids: Rocks formed in hot environments that were in regions where cold-environment-formed asteroids were expected, and so on.
The main asteroid belt is much more diverse than originally thought, the study shows. Dante Lauretta, lead scientist on the asteroid sample return mission OSIRIS-REx and professor at the University of Arizona, said in an e-mail that the study "represents a new paradigm in our understanding of the compositional diversity of the asteroid belt." Lauretta was not involved in the Nature study.
Although astronomers cannot directly measure temperatures of asteroids, they can infer a rock's origin through geology. For instance, an asteroid with a lot of carbon probably formed far from the sun, in colder temperatures.
The theory is that the planets of our solar system have moved over time. Jupiter, the largest planet in our solar system and the one with the most gravitational pull, had a big part to play. As Jupiter moved toward the sun, it scattered asteroids, "like a snow globe," DeMeo said.
Over time, she said, there was "a big mess of asteroids everywhere." The only place for them to remain was the asteroid belt.
Share:
Newer Post Older Post