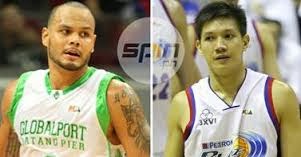 The San Miguel Beermen are looking to make a grand re-entry into the PBA as they have tinkered with their lineup anew.
After being eliminated by the Rain or Shine Elasto Painters in the semifinals of the 2014 PLDT myDSL PBA Philippine Cup, the franchise formerly known as the Petron Blaze Boosters swapped point guards with GlobalPort Batang Pier.
Sol Mercado, the league leader in assists, will now wear the San Miguel Beer jersey in exchange for Alex Cabagnot.
This drastic change comes at the heels of a coaching change for the popular franchise as Biboy Ravanes was named as the new head coach with consultant Todd Purves having a bigger responsibility in handling the team. Former head coach Gee Abanilla is now their team manager while Siot Tanquincen departs the squad and joins Barako Bull.
The other part of the deal involved GlobalPort sending veteran Leo Najorda to Barako Bull for Jonas Villanueva. The point guard was then sent to Air21 for Bonbon Custodio.
Air21 has longed for a pure point guard all conference long. They were forced to play Joseph Yeo at the point for stretches even if the former DLSU Green Archer is more comfortable being a two guard.
In the last part of the trade, Rico Maierhofer leaves Barako Bull in exchange for Jason Deutchman and San Miguel’s second round picks in the 2016 and 2017 PBA Draft.
To sum up, Barako Bull acquired Najorda, Deutchman, and San Miguel's 2016 and 2017 second round picks, GlobalPort acquired Cabagnot and Custodio. San Miguel Beermen acquired Mercado and Maierhofer, and Air21 acquired Villanueva.
Mercado averaged 19 points, four rebounds, and five assists this conference while helping GlobalPort get into the quarterfinals. He will be reunited with his buddy Chris Ross. Maierhofer will bring energy for the Beermen. He will help June Mar Fajardo and Arwind Santos collar the rebounds while defending the best wingmen from the opposing team.
Cabagnot on the other hand normed 12 points, four rebounds, and six assists with the Boosters. He ends his almost five years of service to the franchise.
Along with Cabagnot, GlobalPort also received Custodio, which adds another guard to a lineup that already includes RR Garcia, Terrence Romeo, Rudy Linganay, and LA Revilla. Their new head coach Pido Jarencio will need a lot of creativity but he is well-known as one who is very good in handling guards.
Barako Bull got two underutilized players in Najorda and Deutchman. The sweet shooting sophomore rued on Twitter that he barely got the chance to prove himself in Petron as he didn’t receive a lot of playing time.

Making 3s sitting from the bench is pretty difficult if you ask me
— Jason Deutchman (@JDeutch) February 17, 2014


He also pointed out that San Mig Super Coffee and Rain or Shine, the two teams currently in the Philippine Cup Finals, have kept their lineup intact for many years.

Look at the two teams in the finals of this all-filipino conference where the bar is not measured by how good/expensive your import is
— Jason Deutchman (@JDeutch) February 18, 2014

ROS and San Mig Coffee, almost all of their players have been there multiple years and are able to grow with the team and the staff
— Jason Deutchman (@JDeutch) February 18, 2014


The trade was also supposed to include Yousef Taha heading back to GlobalPort for rookie Justin Chua but it was later scrapped as there’s a rule preventing GlobalPort from acquiring a player they recently traded away.
Share:
Newer Post Older Post