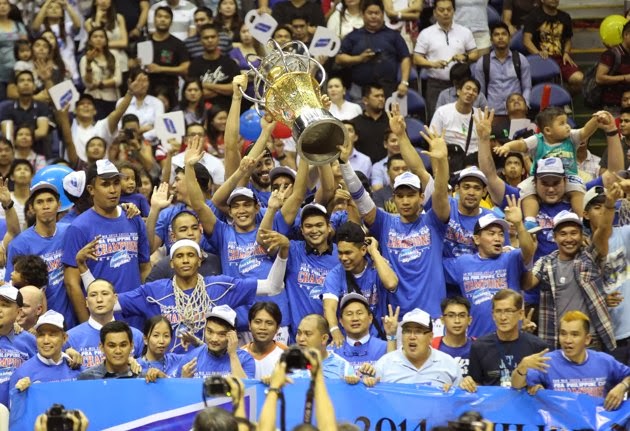 The San Mig Coffee Mixers completed one of the most unforgettable championship rides in PBA history as they conquered the Rain or Shine Elasto Painters, 93-87, in the action-packed and drama-fraught Game Six of the PLDT myDSL PBA Philippine Cup best-of-seven title series at the Smart Araneta Coliseum Wednesday night.
That Game Six triumph catapulted the Mixers to the very top after a struggling 1-5 start and a mere fifth-place finish in the eliminations.
San Mig Coffee defied odds against fourth ranked Talk n Text in the quarterfinals, versus top seed Barangay Ginebra in the semifinals and finally second seed Rain or Shine in the titular playoff to nail a first-ever back-to-back championships and an unprecedented sixth all-Filipino crown.
The Mixers were the lowest seeded team to emerge champion since the sixth-seeded Barangay Ginebra squad went all the way to the top  the 2004 Fiesta Conference.
Coach Tim Cone achieved a great personal milestone in finally surpassing Baby Dalupan’s record of 15 championships.
But for Cone, no one would ever surpass or even match Dalupan’s feat.
“I’ve said it before and I’ll say it again, no one would ever equal Baby. He’s one of the greatest in the world. Imagine 41 championships won in the UAAP, NCAA, MICAA and the PBA,” said Cone.
“I’m just thrilled to bring Baby Dalupan back in the consciousness of PBA fans. I’m thrilled to be part of his legacy,” Cone added.
As they had promised, the Elasto Painters fought to the very end, though putting up a stunt with a walkout attempt in the second quarter.
But no way would it tarnish San Mig Coffee’s great effort and triumph.
“The players are just awesome. They worked very hard for this,” said Cone. “Many times we could’ve quit or pulled out camp. There were so many opportunities to quit but we didn’t.”
Not in this game. Not Mark Barroca.
Barroca rose to the occasion in the crunch and won the PBA Press Corps Papa John’s Pizza Finals MVP award.
The former FEU stalwart and Gilas Pilipinas I campaigner took over the game at the finish, scoring 14 of his game-high 24 points in the fourth quarter.
Ian Sangalang, Joe Devance, Marc Pingris and James Yap had their moments as the Mixers delivered a sixth Philippine Cup championship for the Purefoods/San Miguel Foods franchise.
“It’s surreal. There are so many emotions in my mind right now it’s hard to sort out,” said Cone.
“I hope Ely (Capacio) is here to see this. In dinner with the big bosses, he would give me a big hug and say ‘I told you so,’” Cone also said. “I really wish he’s here to see this. He would be thrilled.”
A big part of the 20,337-strong crowd was thrilled.
The game was stopped for about 10 minutes at the outset of the second quarter with coach Yeng Guiao calling on his team to abandon the game in protest over what he felt was spotty officiating going against them.
But Guiao and the E-Painters returned to the floor after commissioner Chito Salud talked with team owner Raymond Yu and governor Mert Mondragon.
Under league rules on walkouts, Rain or Shine faces a possible heavy sanction for its walkout attempt. It’s P2 million if it’s ruled “a partial walkout.”
As the league commissioner ordered to start running the 15-minute grace period, the E-Painters were back on the bench and ready to return to play in 90 seconds.
At the resumption of play, the Mixers stretched a 30-17 lead to 49-32, but then the Elasto Painters found a way to get back into the game, 43-49, at the half.
The E-Painters roared on in the third period and surged ahead, 62-60, on a three-pointer by Chris Tiu.
Rain or Shine was the fourth team in league history to stage a walkout. Anejo Rum (P550,000 in 1990) and Talk n Text (P1 million in 2010) were heavily fined for walking out and refusing to finish a playoff game. Red Bull had its walkout attempt in 2006 but returned to play in time.
Share:
Newer Post Older Post