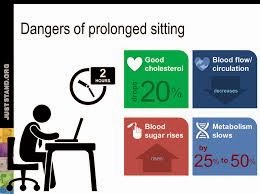 Older adults who spend a lot of time sitting may be at increased risk of having a disability, regardless of how much they exercise, a new study suggests.
Researchers analyzed information from more than 2,200 adults ages 60 and older who wore a pedometer to track their movement for at least four days.
While they were awake, participants spent about nine hours a day sitting down. Every additional hour spent sitting was linked with a nearly 50-percent increase in the odds of having a disability, the study found. The researchers defined disability as having significant difficulty completing daily tasks, such as eating, bathing or getting out of bed and walking across a room.
That means that, if there are two 65-year-old women, and one sits for nine hours a day and the other sits for 10 hours, the second one is 50 percent more likely to have a disability, the researchers said. About 3.5 percent of all participants had a disability.
The findings held even after the researchers took into account factors that could increase the risk of having a disability, such as age, and chronic health conditions such as obesity, stroke and arthritis; as well as how much exercise participants engaged in (such as brisk walking).
"This is the first time we've shown sedentary behavior was related to increased disability regardless of the amount of moderate exercise," said study researcher Dorothy Dunlop, professor of medicine at Northwestern University Feinberg School of Medicine in Chicago. "Being sedentary doesn't erase the benefits of being physical active, it's a separate risk factor," Dunlop told Live Science.
The findings agree with previous research that has linked prolonged sitting to health problems.
Because the study was conducted at one point in time, it cannot prove that prolonged sitting causes disability. For example, it's possible that people spend more time sitting because of their disability. (Although the study accounted for many health conditions, there could be others that explain the link.)
Still, studies show that prolonged sitting can slow blood circulation, which is a risk factor for conditions such as high blood pressure and heart disease, Dunlop said. And slouching can result in a strained neck or back pain, she said.
Dunlop recommended that older adults be more mindful of how long they are sitting, and find opportunities to replace some of their sitting time with light activity, such as standing up when talking on the phone, or taking a walk around the house during commercial breaks when watching TV.
If older adults are concerned about the type of activity they are able to do, they should speak with their doctor, Dunlop said.
Share:
Newer Post Older Post