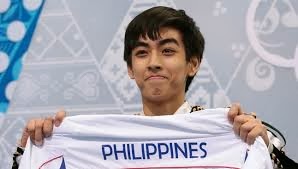 He may not come home with a medal, but Filipino figure skater Michael Christian Martinez certainly won a lot of admirers after giving a good account of himself in his Winter Olympics debut.

Picking up from where he left off in the short program, the 17-year-old Martinez displayed a "performance to be proud of" during the men's figure skating free program Friday night at the 22nd Winter Olympics in Sochi, Russia.

Performing to the tune of "Malaguena” by Ernesto Lecuona, the proud Muntinlupa City native captivated the live audience and his countrymen glued to their television sets with a stunning combination of breathtaking stunts like triple and double axles plus double toes, double flip and double circles in close to four minutes of performance.

Skating third, Martinez garnered 119.44 points in the free program and, adding his score of 64.81 in the short program, jacked up his overall score to 184.25, enough to temporarily push him to the top spot after the first seven skaters.

"He's giving everything he's got," said a TV commentator. "He fought his way through. He really skated the program very, very well. He really looked very, very impressive indeed. He's a very talented spinner because he is very flexible."

But eventually the quality of the competition eventually caught up with the young skater as he eventually slid to second behind Misha Ge of Uzbekistan and then third behind Ge and Jorik Hendrickx of Belgium. Then after the ninth competitor, the United States' Jeremy Abbott, turned in a 160.21 that gave him the overall lead at 232.70, Martinez slipped to fourth to formally bow out of the medal race.

As of posting time, Martinez was in 10th place after 15 of the 24 competitors had completed their runs. Denis Ten of Kazakhstan was in first place with a total score of 255.10 while Tomas Verner of the Czech Republic was in second place with a total score of 232.99.
Still, it was an experience of a lifetime for the youngster, and one that captivated the nation. In a live phone patch interview with Sports5's Patricia Bermudez-Hizon shortly after his performance, Martinez sounded satisfied with his two-day showing.

And this early, Martinez is already setting his sights on the next Winter Olympiad set to be hosted by Pyeongchang, South Korea in 2018.

"My goal is to qualify and compete for the next Winter Olympics," he said.
Martinez, though, won't be going home empty-handed after Gilas coach Chot Reyes announced via Twitter that the MVP Sports Foundation, which lent finanical support to the young skater, will be giving him a bonus of $10,000 (around PhP450,000) for his performance.
Share:
Newer Post Older Post