Breaking News
Loading...
Home » sports » "Its A War" San Mig Vs Rain or Shine For The AFC Finals!!!

"Its A War" San Mig Vs Rain or Shine For The AFC Finals!!! 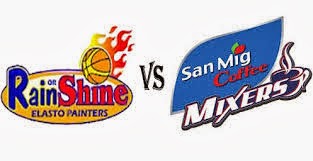 Here comes the keenly awaited rematch that could settle things out.
Rain or Shine and San Mig Super Coffee face off in their version of Manny Pacquiao-Timothy Bradley Part II, beginning their PLDT myDSL PBA Philippine Cup best-of-seven title showdown at the Smart Araneta Coliseum Friday.
It’s a rematch of their previous titular showdown barely won by the Elasto Painters as then B-Meg import Marqus Blakely fouled out entering the final stretch of the deciding Game Seven.
It’s still vivid in coach Tim Cone’s mind.
“We’re going for back-to-back championships then, and they beat us. We’re again going for back-to-back, and again we face them,” said Cone during the pre-finals press conference at Sambokojin restaurant in Eastwood City.
Cone expressed much respect at Rain or Shine but said his team is motivated to get back at the Elasto Painters and reaffirm their status as a champion team.
“The Philippine Cup is the league’s crown jewel. The guys are motivated to win it,” said Cone.
Setting the goal is one thing, pursuing it is another.
“They’re a big hurdle and they don’t change the way they play,” said Cone of the Elasto Painters that swept them in two games in the elimination round.
“They have a one-week break that would be a big advantage along with many others,” Cone also said. “They remind me of the San Antonio Spurs who play the same all the time no matter whether they’re losing by 20 points or winning by one or two. They’re so cohesive, and they know what to do every time.”
Cone’s biggest concern is the series opener – a game they didn’t have time to prepare having been stretched by Barangay Ginebra San Miguel to a full semis series ending Wednesday night.
“Hopefully, we can pull off a surprise. And we’re lucky it’s a seven-game series,” Cone said.
In their one-week break, Rain or Shine coach Yeng Guiao said they healed their injuries and refreshed their bodies.
“That’s really an advantage. One good thing about it was that we’re able to clear our minds for a few days, not thinking about anything. Nakaipon kami ng lakas,” he said.
Guiao, however, isn’t sure if they can convert that advantage to victories.
“San Mig has got here because they’re playing the best basketball at least in their last or seven games after a struggling start. That’s a tribute to their resiliency, and that’s the kind of character we face now,” Guiao said.
“Even if coach Tim Cone says we’ve got their number. That’s irrelevant now. It doesn’t matter at this point. They’ve gotten better and deeper. Ian Sangalang is contributing. Justin Melton is contributing. Mark Barroca is playing better than previously. James Yap has got his shooting back. It’s a whole new team,” Guiao pointed out.
“The biggest mistake that we can make is to think that we have their number,” Guiao stressed.
The Elasto Painters, of course, are equally motivated while chasing a first All-Filipino crown.
That’s what’s also the RoS coach is chasing – the missing piece in his treasure chest.
Cone, on the other hand, is after a fifth Philippine Cup crown or first since winning his last in 2000. He lost all his last three all-Filipino Finals.
Share:
Newer Post Older Post