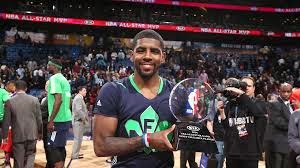 Irving had 31 points and 14 assists and was voted the MVP, Carmelo Anthony made a record eight 3-pointers and scored 30 points, and the East stopped a three-game losing streak with a 163-155 victory over the West on Sunday night in the highest-scoring All-Star game ever.
Fed up with losing the midseason game and tired of the East being picked on for its mediocrity this season, James had a steal and dunk on the first possession, long before defense usually shows up in the All-Star game.
"We wanted this win," James said. "They beat us the last three years and they had a lot of bragging rights, so to be able to come through being down 18 was huge."
Kevin Durant and Blake Griffin each finished with 38 points, four shy of Wilt Chamberlain's All-Star game record, for the West. But the East scored the final 10 points to pull out a game it trailed by 18.
"They started making shots and we didn't get stops and we went a little bit cold," said Griffin, who shot 19 of 23, setting a record for field goals made.
Irving scored 15 points in the fourth quarter. James had 22 points, seven rebounds and seven assists.
The 318 points broke the record of 303 set in 1987.
Durant finished with 10 rebounds and six assists, but the West was shut out after his 3-pointer gave it a 155-153 lead with 1:59 left. Indiana's Paul George made three free throws, Anthony nailed his final 3-pointer, and James scored to make it 161-155. George closed it out with two more free throws and finished with 18 points.
"Both teams played extremely well, we just lost," Durant said.
The game that usually doesn't get tight until the final minutes was close throughout the fourth quarter, neither team leading by more than four until the final minute.
Chris Paul had 11 points and 13 assists, and first-time All-Star Stephen Curry had 12 points and 11 assists for the West. But the best point guard on the floor was Irving, who shot 14 of 17 and helped the East ring up 87 points in the second half after it surrendered a record 89 in the first.
In a colorful tribute to New Orleans, players wore sneakers and socks that ranged from green and blue to orange and purple, making the game look like a Mardi Gras parade.
The parade was one of layups and dunks for the West, which scored 44 points in the first quarter and 45 in the second. Griffin had 18 points in the first quarter and Durant had 22 at halftime, both two shy of records set by Glen Rice in 1997.
And there was plenty of music, the rosters and starting lineups introduced around a concert by Pharrell Williams, who was joined by his own All-Stars in Nelly, Busta Rhymes, Sean "Diddy" Combs and Snoop Dogg.
Magic Johnson led a band, too, encouraging the All-Stars to join him in singing "Happy Birthday" after the first quarter to Hall of Famer Bill Russell, the NBA's greatest champion who was celebrating his 80th.
The All-Stars played better than they sang.
The East finished with 61 percent shooting, needing all sorts of offense after it simply couldn't defend Durant and Griffin.
Durant made six 3-pointers and raised his career scoring average in the All-Star games to a record 30.6 points.
Outside of the ugly sleeved jerseys, it was a good look for the NBA's midseason showcase, bouncing back strongly from an uneven All-Star Saturday night.
The new format of the slam dunk contest Saturday wasn't a hit, but every night is a dunk contest when Griffin is involved.
The guy who once jumped over a car to win a slam dunk contest had eight slams in the first 11 minutes, the backboard often barely done shaking from the last one when he threw down the next.
Durant made a 3-pointer with 26 seconds left to make it 89-76 at the break, one point better than he and the West had two years ago in Orlando. He and Griffin each had 30 points by the end of the third quarter, but the East trimmed what was a West 18-point lead to 126-123 after three.
James Harden started for the West in place of Kobe Bryant, who was elected by the fans but was knocked out by a broken left knee. Bryant said before the game his recovery is "coming slowly" but hopes to be back in another All-Star game.
With Bryant sitting out and longtime regulars Tim Duncan and Kevin Garnett not selected, it was a chance for the younger guys to make their mark. The rosters were loaded with players 25 and younger, including first-time starters George, Irving, Stephen Curry and Kevin Love.
The All-Star newcomers also included official Violet Palmer, who became the first female to referee a major U.S. sports league's All-Star game.
Share:
Newer Post Older Post