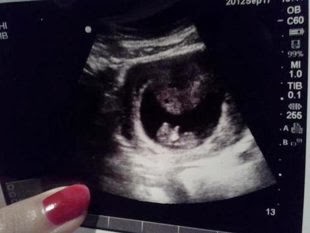 In a story as bizarre as it is deja vu-ish, a 44-year-old fetus has been found in an 84-year-old Brazilian woman. The Daily Mail reports by way of G1 that the discovery came last Friday, when the woman's intense stomach pains landed her in a hospital in Tocantins state in central Brazil.


Early Pregnancy Ultrasound showing fetus in sac.X-rays revealed the unthinkable: a "stone baby." As the International Business Times explains the rare phenomenon is known as lithopedion, in which the fetus grows and then dies outside of the uterus. With the body unable to rid itself of it, the dead fetus is instead covered in calcium as a means of protection, resulting in the "stone baby."
Per G1, the woman says she became pregnant more than 40 years ago but suffered pain during the pregnancy, and visited a healer for help. After taking what he had given her, "Her stomach didn't grow any more, the baby stopped moving, and she thought it had been aborted," says a gynecologist at the hospital where she was transferred.
The gynecologist says X-rays revealed "the face, the bones of the arms, of the legs, the ribs, and the spine," of the fetus, which is believed to have died at between 20 and 28 weeks. In December, a nearly identical case was announced in Colombia. That woman opted to have surgery; the Brazilian says she does not want the fetus removed.
Share:
Newer Post Older Post