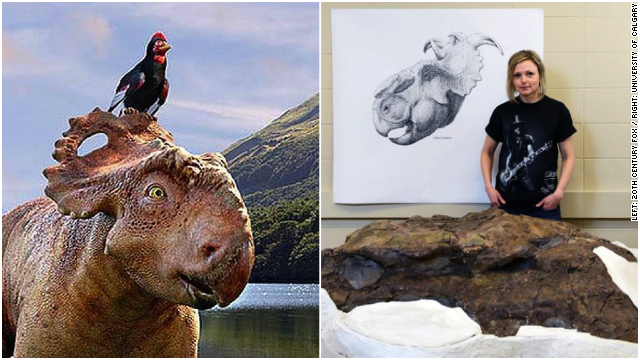 This Pachyrhinosaurus can go to the head of its class.

It's not often, after all, that you can see and touch a skull that's about the size of a Smart Car, about 70 million years old and looks like a mutant blend of a triceratops and giant parrot.
University of Calgary paleontologist Darla Zelenitsky first made the mammoth find in Alberta's Badlands, then revealed it to the world Thursday.
"It almost looks like some sort of mythical beast," Zelenitsky said. "Because it is so big and (mature), it makes for a very strange-looking individual."

Real dinosaurs scarier than ones in film
This isn't the first Pachyrhinosaurus discovery -- that came in the mid-20th century -- and there have been other notable such finds since then in Canada's Alberta province and Alaska.
But what makes this one unique is how well preserved the skull is (75% to 80% complete, which is remarkable for a dinosaur), the fact it's from an older Pachyrhinosaurus (therefore more can be learned from it than a younger version), and, of course, its immense size.
Not that Zelenitsky's team knew all that when they spotted a bumpy rock in mid-October while exploring exposed southern Alberta's Drumheller -- a town that calls itself the Dinosaur Capital of the World for a reason, given the outcrops that make it a paleontologists' dream.
A little digging led to more digging and, after about three days, the realization that they'd found a gigantic dinosaur skull. It took several more months (and the removal of 5 tons of rock) to unearth it in three pieces and show it off to the world. Still, a lot of work needs to be done to peel away remaining surrounding rock and examine the skull in more detail, not to mention see it in full.
"It was really exciting because, when we started, there really wasn't much there," Zelenitsky, an associate professor in the University of Calgary's geoscience department, said. "Then, the skull was not really ending it was so big."
Even with more to peel back, Zelenitsky already calls this skull one of the biggest, if not the biggest, of any Pachyrhinosaurus ever discovered. Given its distinct nature, she and fellow paleontologists will be trying to determine if it is part of its own species or just a big version of an existing one. (There are three known species of Pachyrhinosaurus as is.)
Even if it's part of previously discovered Pachyrhinosaurus species, there's no doubt this skull is quite a sight.
The herbivore's beak at the front of its snout was likely used to crop vegetation. Behind that are rows of teeth that finished off whatever greens made it into the mouth.
Then there's what Zelenitsky describes as a "huge, almost platter-shape structure" and the dinosaur's frill. Instead of pointed horns like a triceratops, Pachyrhinosaurs have masses of bones atop their heads likely used in head-butting rituals to compete for mates or perhaps for combat.
The entire skull is about 2 to 2.5 meters (6.5 to 8 feet) long; the entire animal is only 6 meters, meaning this Pachyrhinosaur (as well as its kin) was very top heavy.
"These animals had huge skulls relative to their bodies," said Zelenitsky.
Share:
Newer Post Older Post