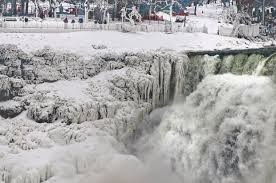 The U.S. side of the Niagara Falls is pictured in Ontario, January 8, 2014. The frigid air and "polar vortex" that affected about 240 million people in the United States and southern Canada will depart during the second half of this week, and a far-reaching January thaw will begin, according to AccuWeather.com.
Share:
Newer Post Older Post