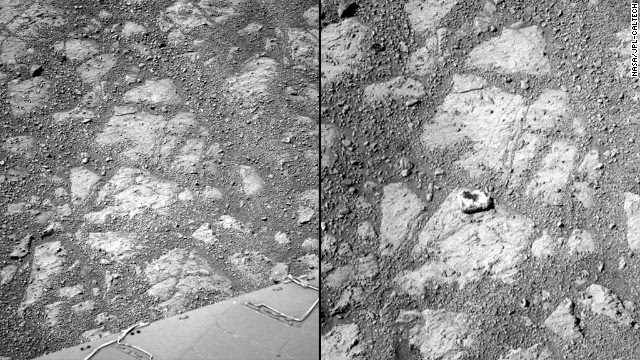 Scientists are baffled by a white rock with a dark red low spot in the middle that "just plain appeared at that spot" on the planet where the rover is situated, says Steve Squyres, lead scientist of the Mars Exploration Rover mission.
In recent weeks, Opportunity took photos of the same spot on Mars, 12 days apart. The rover's panoramic camera showed only barren bedrock on mission day 3528 (in Mars time), but on day 3540, a photo of the same scene revealed the mysterious, doughnut-shaped rock.
Squyres showed photos of this ghostly geological dessert at a recent NASA event celebrating 10 years since the Spirit and Opportunity rovers landed on Mars.
Spirit's mission ended in 2010 after losing the use of two wheels, and ceasing to communicate. But Opportunity is still chugging along and finding new surprises, such as this rock.
"One of the things I like to say is that Mars keeps throwing new things at us," Squyres said at the event, gesturing toward the rock photo and laughing.

The photos of the outcrop showing the absence, and then presence, of the pastry-sized rock were taken 12 days apart. The rover had not driven over that spot, Squyres said.
There are two leading theories about where the rock, called "Pinnacle Island," came from. Neither of them include the possibility of an intergalactic Dunkin' Donuts.
The most likely scenario is that Opportunity flicked the rock with one of its wheels.
"We had driven a meter or two away from here, and somehow maybe one of the wheels, kind of, managed to spit it out of the ground, and have it slide to this position," Squyres said.
Alternatively, there could be a smoking hole in the ground nearby and the rock could be a piece of crater ejecta, or piece of matter spewn from the hole. Squyres doesn't think this is likely, however.
Opportunity is now studying the mystery rock more extensively, making measurements and taking pictures. Its instruments have shown scientists that the "jelly" part is "like nothing we've ever seen before," Squyres said. It's very high in sulfur and magnesium, and it has twice as much manganese as has ever been seen in anything on Mars.
No one knows what that means.
"We're completely confused, we're having a wonderful time, everyone on the team is arguing and fighting," Squyres said.
Spirit landed on January 4, 2004, followed by Opportunity on January 25, 2004. Their primary missions were designated for a mere 90 days, but both far outlasted that target.
Squyres said he used to think that no matter how long the rovers lasted, at some point there would be a point in the mission where the team could say "We're finished" -- that they had learned everything could about Mars with those particular vehicles.
But the Red Planet isn't like that.
"There will be something tantalizing, something wonderful just beyond our reach that we didn't quite get to, and that's the nature of exploration," he said.
Opportunity has otherwise encountered scientifically important phenomena during its decade of investigation. At Endeavor Crater, where it is today, the rover found clay minerals that form in watery conditions, and indicate that water with a neutral pH could have once been there, which would be conducive to microbial life if there had been any.
Endeavor has also unveiled veins of a mineral that appears to be gypsum, which is deposited by water.
Opportunity is not the only robot roaming Mars. NASA's 2-ton Curiosity rover, which landed in 2012, has an even more powerful suite of scientific instruments. Because of Curiosity's findings, NASA announced for the first time last year that life could have existed on Mars.
NASA is planning another rover mission in 2020 -- and that future robot could, possibly, collect samples that would later return to Earth for further study.
Such sophisticated technologies will help us see what other mysterious "sweets" the planet can deliver.
Share:
Newer Post Older Post