Uncovered Egypt "The Age Of Gold" 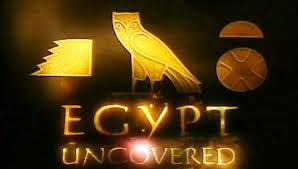 This remarkable series makes the people, culture, and customs of ancient Egypt seen as vivid as if they existed today through superlative production standards, historical accuracy, and a well-developed structure. The five major parts of the series cover religion, government, culture, and daily life in ancient Egypt through the artefacts and hieroglyphic documentation found in tombs, temples, and homes of the period. In many cases, the archaeologist who explored the site is shown on-location and discusses the importance of the find and it has added to our understanding of ancient Egypt. Artefacts are shown in detail, giving as good (or better) a view as one could have in a museum. This excellent series would be an invaluable aid in understanding ancient Egypt, its importance in the ancient world, and the complexity of its society and culture. Fantastic new discoveries in Egypt have dispelled many of the theories the modern-day public has taken as fact, such as who built the pyramids, where and when the civilization began, and the everyday lives of the ancient Egyptian people. Shot on location at many sites off-limits to the public, and featuring many of the world's most noted Egyptologists, Egypt Uncovered offers a comprehensive look at the new archaeological discoveries that are changing what we know about ancient Egypt