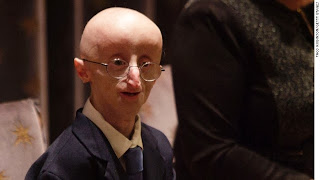 Saturday night could have been a moment for Sam Berns to celebrate -- standing in the middle of Gillette Stadium, flanked by some of his beloved New England Patriots, and no doubt cheered heartily by the nearly 70,000 fans surrounding him.

But it wasn't to be.
Instead of having Berns as an honorary captain in their NFL playoff with the Indianapolis Colts, the Patriots held a moment of silence for the young man who inspired them and many others as he lived with progeria, which causes premature, accelerated aging.
"Do it for Sammy!" one man yelled, piercing the quiet, in video of the ceremony on Boston.com.
Berns died Friday evening due to complications from the rare genetic disease, according to the Progeria Research Foundation.
He was 17.
"I loved Sam Berns and am richer for having known him," Patriots owner Robert Kraft said. "He was a special young man whose inspirational story and positive outlook on life touched my heart."
Advances in kids' early aging disease
Kraft, one of the most well-respected owners in his sport, wasn't Berns' only fan. Far from it.
Part of it had to do with his part in the HBO documentary, "Life According to Sam," which documented his living with what is formally called Hutchinson-Gilford progeria syndrome. He spoke at a TEDx conference in October 2013 about his disease.
More than anything, Sam lived.
A student at Foxborough High School -- in his and the Patriots' hometown -- he joined the marching band, playing a specially designed snare drum. He didn't let the fact that he weighed all of 50 pounds or that the average life span of someone with progeria is 13 years discourage him. He attended his school's homecoming dance. And above all, he kept his head up.
"Even though I have many obstacles in my life, I don't want people to feel bad for me," Berns said in that TedX talk.
Progeria affects approximately one in every 4 million to 8 million infants; there are only about 200 children living with it worldwide. The genetic mutation tied to it causes those with the disease to produce the protein progerin, which blocks normal cell function.
As they age rapidly, these children suffer from a loss of body fat and hair and an inability to gain weight.
They are prone to developing osteoporosis, a disease where bones become weak and are more likely to break.
"All in all, I don't waste energy feeling bad for myself," Berns said. "I surround myself with people that I want to be with. And I keep moving forward."
That attitude influenced many, regular folks and celebrities. Those tweeting their condolences included Katie Couric, ESPN columnist Rick Reilly and many Boston-area athletes.
"The warrior, Sam Berns passed away today," tweeted the Boston Bruins' Brad Marchand. "He was an inspiration to everyone. You will be missed greatly.
"Fly High."
Share:
Newer Post Older Post