The Iconic Statue Of Christ In Rio, Strike By Lighting 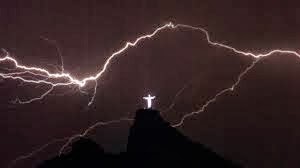 The iconic statue of Jesus overlooking Rio de Janeiro, one of the city's most recognizable landmarks, has lost a thumb tip to lightening, a report said Friday.
Christ the Redeemer, the giant monument and tourist magnet that looms atop nearby Mount Corcovado, was damaged in a huge storm Thursday night, O Globo newspaper reported on its website.
Standing at 38 metres (125 feet) -- pedestal and all -- the statue was named in a 2007 global poll as one of seven new wonders of the world.
Site caretaker Father Osmar Raposo said the giant concrete figure that juts from the mountain top some 710 metres above Rio's beaches, would undergo repair next month.
O Globo broadcast helicopter images of the statue on its G1 web portal, showing part of Christ's right thumb missing.
Brazil's national space institute INPE counted more than 40,000 lighting flashes during the three-hour storm which felled dozens of trees and flooded streets.
Winds gusting at 87 kilometres per hour (52 miles per hour) forced one of Rio's airports to close and brought a halt to boat trips across the city's Guanabara Bay.
Share:
Newer Post Older Post