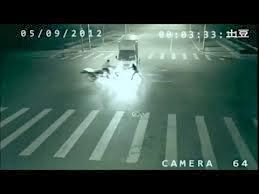 Superhuman person or alien saves a man on a motorbike from complete destruction by teleporting him a few meters away in less than a second, and then flees the scene as quickly as possible. A few observations from the footage:
The truck driver swerves to his left at the last second slightly and leaves dark skid marks behind.
The spot the motorbike man is teleported from, there is a dark round imprint left on the road and the same around the new position which both gradually fade away after a few seconds (while the skid marks remain). The truck driver can be observed looking at the dark ring closest to him in confusion, as it fades away (he looks right at this spot). Also, he doesn't know whether to go and apologise to the motorbike man because he isn't sure if it's who he thought he was about to run over, so he wanders around dazed (most likely questioning his own sanity).
The superhuman person (teleporter/jumper) seems to have rather large hands which appear unusually bright white (unless wearing gloves) and is quick to put them in pockets while fleeing the scene. Why flee the scene so quickly? The superhuman could be afraid of being different / rejection from society and so does not want recognition for the heroic act. Or perhaps the hoody is hiding a distinct alien appearance.
The motorbike man sits on the kerb totally bewildered (in shock) trying to figure out where he went and how he survived and ended up safely behind the truck with a random person in a hoody by his side.
The superhuman person likely does not say a word to either of the men, and does not want to acknowledge the intervention at all.
The mysterious hooded figure leaves the scene in a similar direction to whence it came when first bursting on to the scene, which is consistent.

Is this for real?

The video footage seems real and as explained in the description, there are dark rings shadows appeared at the original spot of the supposed accident and also at the new spot where the bicycle reappeared.

The 'superhuman' looks like a girl from the walking manner after the 'save'.

If this is real, it means superhuman like the heroes in the " X-men " movie really exist?