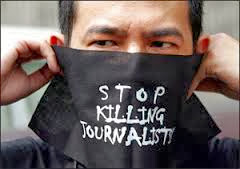 The Philippines has tied with India for second place in yet another list of the world’s most dangerous countries for journalists in 2013.
The Paris-based International News Safety Institute (INSI) said both countries each recorded 12 deaths of journalists and one media worker.
War-torn Syria topped the list with 19 journalists killed in 2013. It also ranked first in the previous year when it recorded 28 deaths.

Ranking third was Iraq with 11 journalists killed while Pakistan was in fourth place with nine.
INSI recorded a total of 126 deaths in 29 countries last year, adding that in the Philippines, nine journalists were murdered by unknown assailants. The cases remain unsolved so far.
Four journalists died while doing their jobs this year. They were covering super typhoon Yolanda’s onslaught.
Earlier this week, Philippines ranked third in a listing of the world’s deadliest countries for journalists.
Share:
Newer Post Older Post