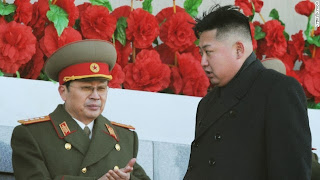 "In the seething period of the effort for building a thriving country last year, we took the resolute measure of removing the factionalists lurking in the Party," Kim said in a New Year's address, referring to the North's ruling Workers' Party of Korea.
"As our Party detected and purged the anti-Party, counterrevolutionary factionalists at an opportune time and with a correct decision, the Party and revolutionary ranks were further consolidated and our single-hearted unity was solidified to the maximum," Kim said, according to the text of the speech carried by North Korean state media.

The purged uncle, Jang Song Thaek, was considered instrumental in Kim's rise to power in December 2011 and, until recently, was regarded as the second-most powerful figure in North Korea. But the young leader turned his back on Jang in spectacular fashion late last year, having him executed last month on charges he tried to overthrow the government.
A publicized purge
The death of Jang, who was married to Kim's paternal aunt, was announced in an unusually public declaration by the reclusive regime. Purges and executions of senior officials are believed to have taken place under the North's previous leaders, Kim's father and grandfather, but without such public fanfare.
North Korean state media attacked Jang's character and detailed an extensive list of his alleged crimes, describing him as "despicable human scum."
Kim's speech Wednesday is the first time he has publicly commented on the purge.
A range of different theories have been put forward for the real causes behind Jang's downfall. Last week, South Korea's main intelligence agency told lawmakers that it believed business disputes inside the North Korean regime had precipitated the purge.
Share:
Newer Post Older Post