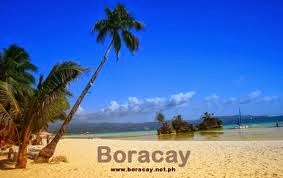 Boracay is a small island in the Philippines located approximately 315 km (196 mi) south of Manila and 2 km off the northwest tip of Panay Island in the Western Visayas region of the Philippines. Boracay Island and its beaches have received awards from numerous travel publications and agencies. The island comprises the barangays of Manoc-Manoc, Balabag, and Yapak in the municipality of Malay, in Aklan Province. The island is administered by the Philippine Tourism Authority and the provincial government of Aklan. Apart from its white sand beaches, Boracay is also famous for being one of the world's top destinations for relaxation. It is also emerging among the top destinations for tranquility and nightlife.

Boracay Island is a great place for just lazing around. Seven km long, it is only one km wide at its narrowest point. Boracay's largest villages or barangays are Yapak, Balabag and Manoc-Manoc. A confusing network of paths and tracks connects them, and several smaller hamlets called sitios, so maps of Boracay can only serve as a general guide. Slightly more than half the 5200 population lives in Manoc-Manoc.

Boracay is also well known for its now very rare gleaming white puka shells, said to be the best in the world. For years puka shells were dug out of the beach at Yapak and then sold. It's already a fait accompli that large masses of land are soon going to be moved in the north of the island. The most important Philippine property developers, Ayala Land, FiI-Estate and Primetown Property Group have bought up 205 hectares of land. There they intend to build resorts and housing for the better off; construction on the obligatory golf course is already well under way.

For many people, Boracay is the typical Pacific island paradise. Whether this will change in the foreseeable future depends on how much building development goes on. Which will inevitably change the face of the island Out of all recognition. The new slogan seems to be 'concrete instead of bamboo'. Fortunately, so far most architects have succeeded in designing buildings that do not dominate their environment and fit in with the island around them.