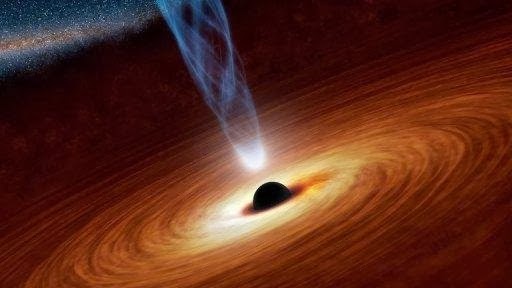 Black holes are the source of endless fascination and speculation. Do they hold the secrets of the universe and perhaps even the key to time travel?
We may never know the answers to those questions because famed theoretical physicist Stephen Hawking says black holes don’t actually exist. At least not in the way we’ve been taught to think about them.
"The absence of event horizons mean that there are no black holes — in the sense of regimes from which light can't escape to infinity," Hawking writes in a new paper entitled, "Information Preservation and Weather Forecasting for Black Holes."
So, what does that mean exactly?
Well, what Hawking is saying is that he doesn’t believe "event horizons," gravitational traps from which even light cannot escape, actually exist.
It’s a "mind-bending theory" as New Scientist puts it, which ensures the debate will continue 40 years after Hawking first brought the concept of black holes to the public.
In his lecture “Into a Black Hole,” Hawking described how an event horizon works:
“Falling through the event horizon, is a bit like going over Niagara Falls in a canoe. If you are above the falls, you can get away if you paddle fast enough, but once you are over the edge, you are lost.There's no way back. As you get nearer the falls, the current gets faster. This means it pulls harder on the front of the canoe, than the back. there's a danger that the canoe will be pulled apart. It is the same with black holes.”
But now, Hawking says event horizons don’t exist. However, he does say that “apparent horizons” could exist, meaning that light technically could escape from the deep gravitational pull of a black hole. Put simply, an apparent horizon would only temporarily hold light and information, eventually releasing them back into space.
Though, “eventually” is a pretty relative term when we’re discussing the nature of spacetime.
“The picture Hawking gives sounds reasonable,” Don Page, a physicist and expert on black holes at the University of Alberta in Edmonton, Canada told Nature. “You could say that it is radical to propose there’s no event horizon. But these are highly quantum conditions, and there’s ambiguity about what space-time even is, let alone whether there is a definite region that can be marked as an event horizon.”
Still, that doesn’t mean astronauts will be lining up to dive into a black hole anytime soon. As Nature puts it, an apparent hoizon wouldn’t burn you to a crisp like an Event Horizon would but it wouldn’t leave you in “good shape” either. Any information or object escaping from a black hole in this scenario would be “pretty scrambled” in Hawking’s own words.
Share:
Newer Post Older Post