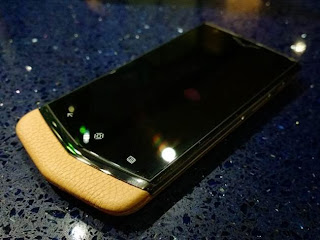 The Vertu Constellation is an Android phone we can't afford
That's because Vertu's second Android-powered luxury handset, which was recently launched in the Philippines, commands a stellar price tag of P297,000—and that's without the company's famed 24/7 global concierge service yet. For that, you'll have to spring an extra P36,000 or £500 per year.

Dominating the front of the device is a large piece of sapphire crystal glass that only a diamond can scratch. Underneath that scratch-proof glass is a 4.3-inch 720p touch display.

The Vertu Constellation's frame is made of grade-5 titanium, and Vertu asserts that's two and a half times stronger than stainless steel—at half the weight. The entire rear is swathed in genuine calf leather that comes from the Alps region of Europe and is available in five colors: beige, black, brown, orange (our favorite), and pink.
As with every other Vertu handset, the Constellation is put together piece by piece by hand in England. Indeed, everything about the phone's exterior screams high-end.

Pity we can't say the same thing about the specs. The Constellation runs Android Jelly Bean and features a 1.7GHz dual-core Snapdragon processor, alongside 32GB of non-expandable storage. Also on board are a sealed 1,800mAh battery and a pair of cameras: a 13-megapixel sensor around the back and a 1.3-megapixel up front. Bleeding-edge processing power may not be too high on Vertu's priority list, but still.

What the company does seem to pride itself on is the exclusive range of services bundled with every Vertu Constellation that is grouped as Life and Certainty. The former provides customers access to exclusive clubs, invitation-only events, and private shopping experiences, while the latter helps secure their phones and data, in addition to offering global WiFi access through iPass.

If you have boatloads of cash to spare and are genuinely interested in owning the latest Vertu Constellation luxury phone, check out the brand's first boutique store in the Philippines, which is located in the east wing of Shangri-La Plaza Mall.