Philippines Mayor Among 4 Killed in Shooting at Manila Airport 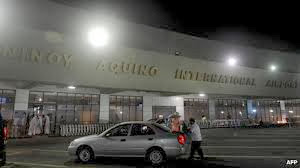 Gunmen opened fire outside a terminal at Manila's international airport on Friday, killing the mayor of a southern Philippines town and three other people, authorities said.

The attack wounded five other people and caused panic among travelers caught up in the chaos.
Gun crime and political violence occur with grim frequency in the Philippines. But the shooting Friday at Terminal 3 of Ninoy Aquino International Airport appeared particularly brazen.
The dead include Ukol Talumpa, the mayor of Labangan, a town in the southern Philippines, and his wife, said Jose Angel Honrado, the general manager of Manila International Airport Authority. The identities of the two other people killed haven't been confirmed, he said.
The Philippine National Police is investigating the shooting for which there are believed to be two suspects, Honrado said. Police officials didn't immediately respond to CNN requests for comment.
Authorities said the shooting took place around 11:20 a.m. at the terminal's loading bay, an area outside the airport's security screening of passengers.
Honrado said flights haven't been disrupted and the airport is operating as normal, except for the specific area where the shooting happened.
The people wounded in the attack have been taken to a medical center for treatment, he said.
The official Philippines News Agency reported that Talumpa had previously survived an assassination attempt in Manila in 2010 and a grenade attack in 2012 in Zamboanga del Sur, the province where Labangan is situated on the southern island of Mindanao.
The Philippines is plagued by political violence. Some political clans control private armies.
The deadliest outbreak of politically motivated violence in recent history took place in 2009 in Maguindanao province on Mindanao. The wife and sister of a political candidate and 30 journalists were among the dozens of victims who were shot and buried in a mass grave.
Philippines authorities say there were more than 1.2 million registered firearms in the country last year and estimate there were another 600,000 unlicensed firearms in circulation nationwide.
The Philippines is currently estimated to have a population of about 106 million people.
Share:
Newer Post Older Post