Breaking News
Loading...
Home » sports » Kobe Bryant Announces That He Will Return To Lakers On Sunday

Kobe Bryant Announces That He Will Return To Lakers On Sunday 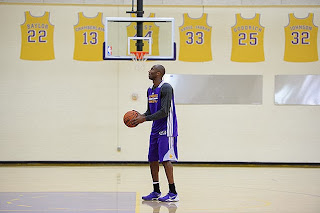 After raising the possibility earlier this week, Kobe Bryant and the Los Angeles Lakers made it official on Friday afternoon — Bryant will return to the L.A. lineup this Sunday night at 9:30 p.m. ET against the Toronto Raptors at Staples Center, just under eight months after suffering a torn left Achilles tendon.

The return will come three weeks after Bryant was cleared to resume basketball activities and return to practice, and 240 days after rupturing his Achilles during an April 12 meeting with the Golden State Warriors. Despite Bryant's claims that he had "shattered" the recovery timeline for Achilles injuries, this actually falls right in line with the initial post-surgery estimate of six to nine months.
Returning Sunday means that Bryant's first week back comes not only at home — and you'd suspect that being able to unveil the newly healthy Mamba in front of the Staples faithful was a pretty big part of this, especially considering the recent end of the franchise's sell-out streak — but with some rest and recovery time built in. The Lakers are off Monday before a Tuesday home game against the Phoenix Suns, and then have two days off before beginning a four-games-in-five-nights road trip next Friday against the Oklahoma City Thunder.
Bryant has said over the course of the last couple of months that, while not yet 100 percent, he felt capable of playing under appropriately heightened circumstances, but was choosing instead to continue working on his rehabilitation to increase the likelihood that he'd be fully ready (and fully able to stay off the disabled list) when the rubber once again met the road. When Bryant's race begins anew on Sunday, he'll rejoin a 9-9 Lakers team that sits 1 1/2 games out of the eighth seed in a brutal Western Conference and that has been middling on both offense (16th in points scored per possession) and defense (17th in points allowed per possession).
What sort of impact Bryant has on those numbers — given Kobe's game, you'd expect the former number to nose upward and you wouldn't be surprised if the latter held steady or dipped a bit — and how big a workload he'll be able to handle of the bat ought to be pretty fascinating to watch. Will he immediately go for the throat and begin jacking shots like the Kobe of old? Will he adopt the sort of ultimate facilitator he dabbled in last year while he gets his legs and wind back? Will he struggle even more to stay with quicker opponents and compromise a Laker defense that, energy and effort notwithstanding, often seems teetering on the brink as it is? Or will this peerless competitor, at 35 years old and eight months removed from the most significant injury of his life, actually look like the hero the Lakers are promoting him to be?
I, for one, am pretty excited to find out. I'm betting you are, too. Welcome back, Kobe. It's been too long.
Share:
Newer Post Older Post