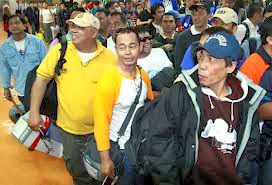 “Filipinos are being noted as the ‘best’ skilled workers in the world today.”
This was how a government official described the ability of workers in the country, as he cited the increasing number of skilled Filipino workers hired by foreign companies, based on the records of the Overseas Workers Welfare and Administration (OWWA), an attached agency of the Department of Labor and Employment (DOLE).
Data showed that the number of skilled workers hired by foreign companies, including those hired by foreign government agencies, continue to increase yearly.
“Because of their skill, other countries are expecting to hire more Filipino skilled workers from time to time,” said Technical Education, and Skills Development Authority (TESDA) Deputy Director-General Teodoro C. Pascua.
“Because of their extraordinary talents, Filipinos are among the best skilled workers in the world,” stressed Pascua, during the recently concluded 2013 Regional Skills Competition (RSC) held in Cabadbaran City.
Speaking before the competitors, coaches, and experts, the TESDA official said that Filipino skilled workers are among the “sought-after workers” in the various parts of the world.
Pascua pointed out the increasing number of overseas Filipino workers (OFWs), based on the database of the OWWA, and the Philippine Overseas Employment Agency (POEA).
Because of the country’s notable contribution in the foreign labor force, Pascua said that it is but necessary for technical-vocational (techvoc) students to be trained more.
“We need to train our students and skilled workers to prepare them for their future,” Pascua added.
However, Pascua said that what is more important is the values and character that Filipino workers possess.
“This is also one of the reasons why most foreign employers preferred to hire Filipino workers than other nationalities,” he said.
“Filipinos are trustworthy and willing to sacrifice no matter how difficult life may be. This is proven by our skilled OFWs. Likewise, more foreign employers give values to their family, a thing they have seen as the reason of Filipino employees working abroad,” added Pascua.
As this developed, Pascua enjoined the youth sector to be at their best.
“Develop your skills, and do the right thing… Be the best that you can be… and if you have already qualified in the ASEAN (Association of Southeast Asian Nations) and world standards, you will be given the opportunity to represent the country,” he pointed out.
Share:
Newer Post Older Post