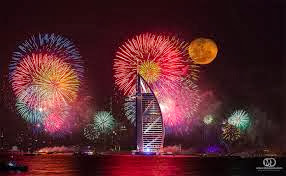 Happy New Year! This is my first post for the year 2014. lets see the year end fireworks all around the world who has the most beautiful fireworks display.
In Dubai -- a city obsessed with superlatives -- organizers pulled off a world record for the biggest fireworks display near the world's tallest building.
The spectacular show featured 400,000 pyrotechnics over 400 parts of the Dubai shoreline. That's 100 kilometers (62 miles) of waterfront lighting up.
The Guinness World Records staff later labeled it the largest ever. The show blew Kuwait's world record out of the water when last year it set off 77,000 fireworks over 64 minutes.
Share:
Newer Post Older Post