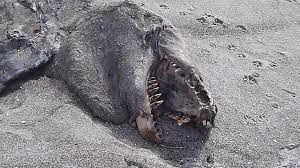 A grisly carcass discovered last week on a New Zealand beach looks like the stuff of nightmares: Its mangled, decomposing body, half buried in sand, measures about 30 feet long; its eyeless head houses gaping jaws bearing a dozen or so pointed, cone-like teeth. Is it prehistoric? Is it a prank? Actually, it's probably an orca.
According to New Zealand's SunLive, the mysterious remains were found by a group of beach-goers near Pukehina on New Zealand's Bay of Plenty. One of the group posted a video of the so-called "monster" to YouTube on April 28, along with this simple query: "Can anyone identify what it is?"
The video captured the imagination of viewers, who suggested in the comments section that the creature could be anything from a saltwater crocodile to a giant moray eel. But according to marine mammal expert Anton van Helden, the carcass is likely the remains of a killer whale.
Van Helden told New Zealand's Channel 3 that he could identify the carcass as an orca because of its distinct flipper. He went on to add that, with only images of the remains to go on, it's hard to postulate how the animal may have died.
Killer whales are among the most wide-ranging animals on the planet, inhabiting waters from polar regions to the Equator, according to National Geographic. They are renowned predators that live in groups, called pods, whose hunting behavior has been compared to that of wolf packs.
Unfortunately, in some areas of the world -- particularly Alaska -- fishermen see killer whales as competition and intentionally shoot them, according to the website of the International Union for Conservation of Nature and Natural Resources.
As Discovery notes, this isn't the first bizarre mass of dead meat to wash up on shore. Marine "blobsters" -- large carcasses so badly decomposed as to evade definitive identification -- puzzled researchers for years until an innovative team analyzed tissue samples with electron microscopes. Interestingly enough, they turned out to be various species of whales.
Share:
Newer Post Older Post