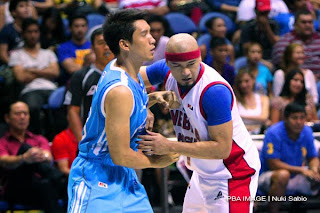 No less than two of the league’s most popular – if not the two most popular — teams are going to figure against each other in one of the record-breaking three games in the PBA’s season-opening Sunday at the Smart Araneta Coliseum, ushering in hostilities in the 2013-14 MyDSL Philippine Cup.
Newly-crowned 2013 Governors Cup champion San Mig Coffee and 2013 Commissioner’s Cup runner-up Barangay Ginebra tangle in the 3:00 p.m. encounter at the Big Dome right after the hour-long simultaneous opening ceremonies which will also happen in the cities of Cebu and Davao.
After the short but simple opening rites, three-time defending Philippine Cup champion Talk ‘N Text will also battle Meralco at 3:00 p.m. at the Cebu Coliseum while reigning Commissioner’s Cup titlist Alaska takes on last season’s Philippine Cup runner-up Rain or Shine at 5:00 p.m. at the University of Southeastern Gym in Davao City.
This is the very first time in the league’s 39-season history that there will be three games — one each in Luzon, Visayas and Mindanao – that will be played on season-opening day. Previously the season-openers had only been either one or two games and usually held mostly in Metro Manila.
While focus will be on Barangay Ginebra and San Mig Coffee as teams which averaged an incredible 17,136 in attendance in their three meetings last season – all three in just the elimination rounds, all eyes will surely be on both teams’ most important rookie additions which were the first two players selected in the Annual PBA Draft last Nov. 3.
The Kings’ fans are hoping No. 1 overall draft pick Greg Slaughter is going to be the final missing piece to their favourite team’s ending a five-year title drought. Barangay Ginebra has not won a PBA championship since the 2008 Fiesta Conference and the Kings landed their first No. 1 pick in the Draft for the first time in 17 years, or since Marlou Aquino in 1996.
Barangay Ginebra, which also last won the Philippine Cup in 2007, also fortified its frontline further with its landing bruiser James Forrester with the No. 4 pick in the Draft.
Their acquisitions, many say, fill up the Kings’ needs and weaknesses in the middle and are expected to strengthen a Barangay Ginebra squad that already has season MVP runner-up LA Tenorio, former league MVPs Mark Caguioa and Jayjay Helterbrand, former Smart Gilas stalwarts Japeth Aguilar and Mac Baracael and slamdunk champion Chris Ellis.
But former PBA Board chairman Robert Non says the Kings are still a work in progress.
“From the last Ginebra champion team (in 2008), tatlo na lang ang natira – Caguioa, Helterbrand and Billy Mamaril. Lahat bago, or in their second year pa lang sa team. So makikita mo lang kung contender ka sa middle of the conference… You can never tell until such time na mag-jell ang isang team,” Non was quoted to have said.
After Slaughter, the No. 2 pick went to San Mig Coffee which expectedly tabbed former PBA D-League MVP Ian Sangalang. The Mixers also added three more rookies to their roster in Isaac Holstein, Justin Melton and JR Cawaling.
The 6-7 ¼ Holstein was Globalport’s No. 7 pick in the Draft but San Mig Coffee traded for him in exchange for No. 10 pick Justin Chua and veteran Leo Najorda.
Melton was picked by the Mixers with the 13th selection in the second round and Cawaling with the 30th overall pick in the third round.
San Mig Coffee head coach Tim Cone was hoping to have had more time to practice with his new recruits, having ended the previous season just 23 days ago. But while forced to work with what he has, Cone thinks his boys will be ready.
“We’re not as prepared as I would like and I’d certainly like to give more time to the rookies to learn the system first before our first game against (Ginebra). But the rookies are picking up things quickly and we certainly have enough veterans who know how to get themselves ready. It’s not an ideal situation for us but it’s workable,” said Cone.
As a result, two-time former league MVP James Yap, two-time and reigning Defensive Player of the Year Marc Pingris, PJ Simon, Joe Devance and Mark Barroca are expected to banner San Mig Coffee anew in their bid for a second straight championship and at the same time regain the Philippine Cup title they last won during the 2009-10 season.
Like in last season’s Philippine Cup, the 10 teams have been grouped into two but this time with Air21, Alaska, Barangay Ginebra, Petron Blaze and Rian or Shine in Group A and Barako Bull, Globalport, Meralco, San Mig Coffee and Talk ‘N Text in Group B. In the elimination round, the teams play their groupmates once and the teams from the other group twice for a total of 14 games each in the elims. Only the Top 8 teams after the elims will advance to the playoffs.
In the quarterfinals, the Top 2 teams in the elims will have the twice-to-beat advantage against the Nos. 7 & 8 teams while the Nos. 3 to 6 teams figure in two best-of-3 quarterfinal series.
Quarterfinal survivors figure in two best-of-seven semifinals leading to the Finals which will also be a best-of-seven affair.
Share:
Newer Post Older Post