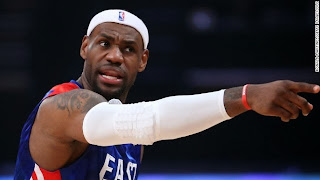 Lebron James has revealed an interest in joining forces with David Beckham to bring a new Major League Soccer (MLS) franchise to Miami.

The Miami Heat forward told reporters Monday that preliminary talks were underway with interest from both sides.
"David has become a good friend of mine over the last few years, and I think it would be great for this city to have a football club for sure. There's interest on both sides. It's preliminary talks but there is some open dialogue," James said.
If a partnership is agreed it would be James's second investment in the sport -- the 28-year-old is already a minority shareholder in English Premier League team Liverpool.
"I've grown a great interest in watching the game ... it's a pretty intense sport and my kids love it as well. I've grown to the point where I know exactly what's going on when I'm watching the game."
Beckham, who retired from the professional football in May, publicly expressed his desire to become a club owner at a book launch last month.
Read more: David Beckham 'passionate' about being club owner


"I'm passionate about staying in football and being an owner of a team is something I'm passionate about. Miami is one of the places we looked at, and we've looked at others too," the 38-year-old said.
The former England international's groundbreaking contract signed with LA Galaxy in 2007 gave him the option to create a new MLS team for $25 million.
"When I signed my contract six, seven years ago, my manager Simon Fuller actually got a clause in the contract that enabled me to have a franchise at the end of my playing career and obviously now I've stopped playing," he said.
Beckham and James appear undeterred by the city's previous foray into MLS which saw Miami Fusion close for business in 2002 after only four years in the league.
Today, the MLS supports 19 teams with a 20th club -- New York City FC -- set to launch in 2015.
James says research into the viability of a franchise is ongoing but he doesn't doubt Miami's potential.
"I think this could be huge, but you never know. I think this is a great town for soccer. There's a lot of soccer players here and great youth soccer players here and people love the city as well so that will definitely help," he said.
Beckham, as you would expect, was typically enthusiastic when quizzed last month about soccer's long-term prospects in the U.S.
"It's going to get better and bigger," said Beckham. "Since I moved there, 11 to 12 teams have come into the league. I have seen the excitement of the people talking about soccer or football."
Share:
Newer Post Older Post