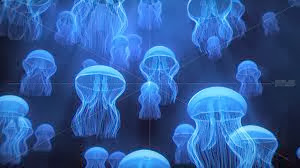 The sun is shining, you're rolling in the waves, showing off the toned torso you worked on at the gym all winter.
Suddenly a sharp, burning sensation hits your skin.
You've just been stung by a jellyfish.
If experts' warnings are true, swimmers around the world can expect to experience these unwanted love taps in greater numbers than ever before.
"Jellyfish and tourism are not happy bedfellows," says Dr. Lisa-Ann Gershwin, author of the recently published book, "Stung! On Jellyfish Blooms and the Future of the Ocean." 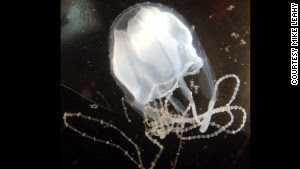 Despite being smaller than a pinky nail, the irukandji jellyfish is one of the world's most toxic animals.
Gershwin says popular beach resorts around the world are seeing huge increases in jellyfish "bloom" activity, a result of overfishing and changing water temperatures.
"The French and Spanish Rivieras, Chesapeake Bay, the Great Barrier Reef, Hawaii ... some of the numbers are staggering," says the American scientist who's now based in Australia.
"In Hawaii there have been times that 800 or 1,000 people have been stung in a day. In Spain or Florida, it's not uncommon in recent years for a half a million people to be stung during an outbreak. These numbers are simply astonishing."
At the beginning of October, a large amount of jellyfish inhabiting a cooling-water intake at a Swedish nuclear plant caused operators to manually shut down production at its largest reactor.
More: Jellyfish prompt nuclear shutdown
In Ireland, a jellyfish bloom reportedly killed thousands of farmed salmon, according to the Irish Times.
This past summer, southern Europe experienced one of its worst jellyfish infestations ever. Experts there have been reporting a steady increase in the number of jellyfish in the Mediterranean Sea for years.
According to a report titled "Review of Jellyfish Blooms in the Mediterranean and Black Sea," written by Fernando Borea for the General Fisheries Commission for the Mediterranean and the United Nations, scientists are catching up to what travelers in the Med have been experiencing for years.
"In the last decade ... the media are reporting on an increasingly high number of gelatinous plankton blooms," reads the report. "The reason for these reports is that thousands of tourists are stung, fisheries are harmed and even impaired by jellyfish."
Although noting that significant jellyfish blooms "have been known since ancient times and are part of the normal functioning of the oceans," the report cites global warming and global overfishing (which removes jellyfish predators) as causes for exploding jellyfish populations in recent years. 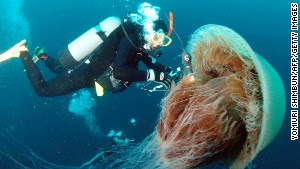 A diver attaches a sensor to a large Nomura's jellyfish off the coast of Komatsu in northern Japan. Large schools of these giant jellyfish, which have bodies ranging one to 1.5 meters in diameter, drift into Japanese waters in autumn and damage coastal fisheries.
The situation in the Mediterranean was dire enough to prompt Britain's foreign office to issue a warning to its citizens vacationing along Europe's southern coast to watch out for jellyfish.
The world's deadliest jellyfish
There are more than 2,000 species of jellyfish swimming through the world's waters.
Most stings are completely harmless. Some will leave you in excruciating pain.
Then there are the killers.
Many of the world's deadliest jellyfish are box jellyfish, which refers to the species' cube-shaped meduae.
"There are several species of big box jellyfish that have caused many deaths -- these include chironex fleckeri in Australia, chironex quadrigatus in Japan and related species in Thailand, Papua New Guinea and Indonesia," says associate professor Jamie Seymour, a venom biologist at Australia's James Cook University.
Also known as the sea wasp and the northern Australian box jellyfish, the chironex fleckeri is possibly the worlds most venomous animal.
Its tentacles can reach lengths of up to three meters long, while its bell is about the size of a human head. It can be found throughout the tropical waters of the Indo-Pacific.
A close cousin and fellow contender for the "world's most venomous" cup is the Irukandji, which is the size of a thimble.
Good luck scanning the waters for that one before you leap in.
"How toxic they are is just phenomenally frightening and equally fascinating," says Gershwin.
"Just the lightest brush -- you don't even feel it -- and then, whammo, you're in more pain than you ever could have imagined, and you are struggling to breathe and you can't move your limbs and you can't stop vomiting and your blood pressure just keeps going up and up.
"It is really surprising how many places they occur around the world -- places you would never expect: Hawaii, Caribbean, Florida, Wales, New Caledonia, Thailand, Malaysia, Philippines, India ... as well as Australia."
Share:
Newer Post Older Post