How Much I Feel - Ambrosia 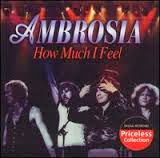 How Much I Feel" is a 1978 song by American rock band Ambrosia. The song, written by David Pack, was released in the summer of 1978 as the lead single from their third album, Life Beyond L.A., peaking at position 3 on the Hot 100 chart.
The single's B-side, "Ready for Camarillo", was written by Joe Puerta.
Pack also penned the hit singles "Biggest Part of Me" and "You're the Only Woman (You & I)" for the band's 1980 follow-up album, One Eighty.