HK, Manila Fail To Agree On Apology Over 2010 Hostage Crisis 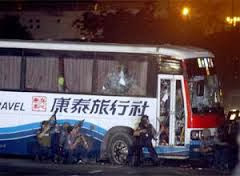 Hong Kong and Filipino representatives met but failed to reach consensus on Thursday over who should deliver an official apology and the amount of compensation for victims of the 2010 Manila hostage incident, in which a government rescue operation failed to stop a retired policeman from killing eight Hong Kong tourists.

After the meeting, Tu said both sides came closer to an agreement but a gap still exists between their understanding.

"Both sides have put forward their new proposals. And we have a very in-depth discussion, and the gap is narrowed," Tu said.

Ang, who arrived at Hong Kong on October 24, had had a series of closed-door meetings with Tu.

The Philippine councilor told Hong Kong's Cable Television on Wednesday the city could pay US$75,000 each to the families of the deceased and from US$20,000 to US$150,000 to the injured.

Tu had criticized Ang for breaching a mutual agreement to keep the details secret. He said the meeting became sour when he confronted Ang, who also accused the Hong Kong side for leaking information to the media.

"Sometimes I would even describe the atmosphere in the room as very tense. Almost up to a point that each side may walk away. But eventually we put down the sentiment and continued the meeting and, in a sense, successfully finished the meeting," said Tu, who stopped short of describing the series of meetings a success.

Ang, who did not speak to reporters before or after the meeting, is set to leave Hong Kong later on Thursday.

"If there is no meeting between the secretaries, or if there is meeting but no substantial development, then of course we cannot wait forever. And I know that Hong Kong people is also very impatient and very angry, I would say, and sentimental in this point. And I do re-convey the sentiment to Mr. Ang," Tu said.

The Thursday discussions covered four main topics -- who should deliver the apology, the amount of compensation, how to punish those responsible for what the Hong Kong public saw as a botched up rescue operation and how the Manila city government should better protect foreign tourists, Tu said.
Share:
Newer Post Older Post