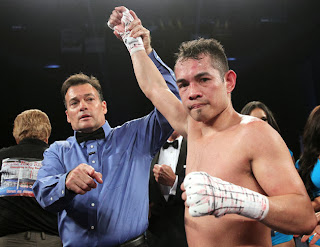 Nonito "The Filipino Flash" Donaire took his unification title fight against former Cuban two-time Olympic gold medalist Guillermo Rigondeaux lightly and paid the price by suffering a stunning unanimous decision over twelve rounds at New York’s Radio City Music Hall on April 13, 2013.
On Sunday, Donaire appeared to be on the verge of losing his second fight in a row but somehow drew some inner strength to turn impending defeat into glorious victory in an eagerly-awaited rematch against Armenian-born Aussie Vic “Raging Bull” Darchinyan at the American Bank Center in Corpus Christi, Texas on Sunday, Manila Time in a fight card telecast by ABS-CBN over Channel 2.
The rematch was almost totally different from their first meeting on July 7, 2007 when Donaire caught the IBF/IBO flyweight champion with a perfectly timed left hook as Darchinyan charged forward and sent him crashing to the canvas and even though he beat the count he staggered across the ring and fell into the ropes, glassy-eyed.
Darchinyan who was riding the crest of popularity as a hellish puncher could never accept the devastating knockout loss, initially describing it as a fluke and, when the rematch was made, categorically stating “I made you and I’ll break you.”
In a sense Darchinyan did help Nonito make a name for himself with that spectacular knockout, which led to a series of championship victories at super flyweight, bantamweight and super bantamweight beating a string of quality opponents and becoming a four-division world champion.
Feeling the pressure to put on an impressive show against the 37 year old Darchinyan who was somewhat reluctantly moving up in weight while Nonito simply had to because, as he told Yahoo Philippines, “in the past I worked hard to make weight, now I’m working hard to be in great shape.”
At the weigh-in Donaire looked relaxed while Darchinyan who came in, rather surprisingly, half-a-pound heavier, seemed focused. There were no smiles and no handshakes. The face-off was intense. Darchinyan muttered, “Rigondeaux schooled him, I’m going to finish him and send him into retirement.”
Darchinyan did school a surprisingly passive and cautious Donaire midway through the middle rounds of the ten round fight which gave Garcia some truly anxious moments especially after Darchinyan caught Donaire with a hard left in round five that sent Donaire to the ropes and spurred Darchinyan to finish strong with lefts and rights.

Feeling the momentum shifting in their favor, Darchinyan’s corner told him “beautiful work” while Garcia pleaded with Nonito “don’t stand in front of him, throw more combinations.”
Darchinyan kept connecting with his left and appeared to steal some of the middle rounds with last-second flurries, a couple of them continuing even after the bell while Donaire only had a right counter to show for his efforts.
An obviously worried Garcia was joined by Nonito Donaire Sr. at the end of the 8th round imploring Donaire to “throw more punches” and insisting “you can’t win this fight by throwing one punch.”
Garcia told Yahoo! Philippines after the fight that he told Nonito "you are giving the fight away. You’ve got to go for a knockout. You can’t outbox him” and win.
Garcia also confirmed what Donaire himself told us, which they both insisted wasn’t a case of looking for excuses, that “Nonito was catching the flu last night but like a true champion he fought.”
Garcia had always insisted that Darchinyan hated Donaire and because of that “Vic was a dangerous opponent. He was in there with nothing to lose.”
Taking the admonition of his corner and reflecting the courage of the Filipino people whom he had earlier praised, Donaire launched one last desperate effort to turn the fight around in the ninth round. When Darchinyan, buoyed by his seeming success in one throwback moment to his usual fighting style lunged forward, Donaire exploded with his patented left hook and Darchinyan went down.
He was groggy and grabbed the ropes to beat the count even as he looked to his corner for solace. Donaire, like a panther going after his prey, pounced on Darchinyan and went for the kill. He buckled Darchinyan’s knees with another left hook and swarmed all over the dazed Aussie with a barrage of heavy handed shots including one mighty uppercut that effectively bludgeoned Darchinyan forcing referee Laurence Cole to call a halt at 2:06 of the round.
At the time of the stoppage two of the three judges had Darchinyan inexplicably ahead by four points, 78-74 which translated into giving him six of the eight rounds while the third judge had it even at 76-76. Donaire took a dig at the judges in a post fight interview with Yahoo! Philippines when he said “that’s their opinion but I never wanted to leave it in their hands.” And, eventually, he didn’t.
Donaire revealed “there might be a little fracture in my cheek because I got hit hard a few times on the same side and the accumulation of punches on the same spot may have fractured my cheekbone. We’ll have it checked and have the injury fixed first,” which meant postponing his planned return to Manila on November 13. He also disclosed “both my hands are bruised.”
Donaire gamely admitted “we got away with it today but we can’t do that in the next fight. We have to get back to the drawing boards.”
He said this time around Darchinyan “was very careful, very tough. He learned a lot, used a lot of movement while we hesitated."
Donaire carried his baby son Jarel into the ring and lifted him high above his head and told us, “he is amazing. He is my inspiration,” and added “This win is not mine, its for the Philippines. Let us pray for those who suffered so much. And thank you for your support.”
Share:
Newer Post Older Post