BIR Chief To Pacquiao: Show Proof Of US Tax Payments 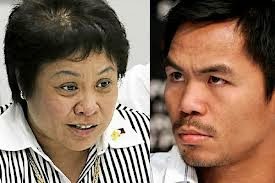 The solution to Manny Pacquiao's tax troubles is simple, according to BIR Commissioner Kim Henares: submit proof that he paid his taxes in the US.

“Hindi ho siya nag-submit ng copies [ng Internal Revenue Service document]. In the first place, kailangan ‘yung copy niyo ['yung original]. Kung ini-imibestigiahan kayo, ang ipapakita niyo ‘yang original na ‘yan pero walang pinapakita,” Henares said in an interview aired on GMA News TV on Wednesday.
According to Henares, Pacquiao has sent a document to the BIR, but it was a mere letter from his promoter, Top Rank Promotions.
“‘Yung kaso na 'to has been going on for two years and we have always given him all the considerations… Ang tanong ko hanggang kailan ho kami maghihintay? Simple lang ‘yan, kung andyan talaga ‘yung papel, eh 'di ipakita niyo na,” Henares noted.
But Pacquiao's lawyer Tranquil Salvador argues that the boxing champ has already turned over the documents from the US' Internal Revenue Service (IRS), but can't show them to the media. The documents are already with the Court of Tax Appeals which is hearing a case filed by Pacquiao against the BIR.
“With all due respect… ang sulat ho ng Top Rank ay may attachment ng IRS payments niya [Pacquiao]. Ang paniwala po namin ay nagpasa na po kami ng dokumento,” Salvador said in a separate phone interview on News to Go.
“At this point of time ay nasa husgado na po ito… nasa jurisdiction na ng Court of Tax Appeals,” he added, noting that another hearing on the case will be held on December 5.

Pacquiao, also Sarangani congressman, claimed at a surprise press conference Tuesday that his bank accounts were frozen because of his tax case and needed to borrow money to help Yolanda victims.

In addition to the BIR's threat to seize Pacquiao's bank deposits to cover his P2.2-billion tax liabilities, the agency is also eyeing the national icon's immense real estate properties.
Henares said the matter is a simple case of tax collection, and has asked two banks where Pacquiao is known to have deposits to hold the money in lieu of delinquent tax payments. Surprisingly, the only known Philippine bank accounts of the purported billionaire Pacquiao contain only P1.1-million.
“Ang issue ko lang, kung wala siyang pera, hindi dahil sa amin [BIR]. Kasi ang pera na nakaremata para sa BIR ay P1.1 milyon lang ho. Hindi ko alam kung nasaan ‘yung ibang pera niya o kung meron ba siyang pera o wala, pero hindi dahil sa amin kaya wala siyang pera,” Henares noted.
If Pacquiao cannot show proof that he paid taxes in the US in lieu of Philippine taxes based on his earnings in lucrative Las Vegas fights, he may get in trouble with US tax authorities as well.
But in a phone patch interview, Pacquiao's promoter, Bob Arum, said the boxer has "religiously" paid his tax obligations and what is needed is a certification from the United States' Internal Revenue Service stating the tax payments Pacquiao has made. The Top Rank president said the IRS has yet to issue that certification.
“Manny’s accountant in the US has asked IRS to send such certification… IRS has yet to send certification because the bureaucracy is so slow,” Arum said.
Two-year-old tax case
In an interview on GMA Network's "Unang Balita" on Wednesday, Henares said Pacquiao's tax case has been pending for two years and that the revenue agency has given the boxer every opportunity to address his tax liability.
Henares said the BIR issued a notice of levy to Pacquiao to inform him of his tax liability of P2.2 billion.
Arum said Pacquiao's tax payments are made in the form of withholding taxes and via electronic payments.
In a report on GMA News' State of the Nation newscast on Tuesday, Atty. Paul Velasco of the BIR litigation department said there is a pending motion in court to stop the BIR from collecting on the alleged tax deficiency of WBO welterweight champion Pacquiao.
Velasco said while the motion is pending Pacquiao should still be able to access his bank deposits.
GMA News' Ivan Mayrina reported that the BIR did issue a warrant of garnishment last June but only 13 banks responded to the warrant. The BIR learned from two banks that Pacquiao has a total of about P1.1 million in deposits.
The BIR's Henares said they wrote to 35 banks and only 11 responded to say there are no Pacquiao active bank accounts with them and two said the Pacquiaos have accounts with them.

The agency's action against one of the country's most popular personalities is a vivid demonstration of its powers under the law.
According to the National Internal Revenue Code, the BIR Commissioner or her duly authorized representative can resort to seizing or "distraint of goods, chattels, or effects, and other personal property of whatever character, including stocks and other securities, debts, credits, bank accounts and interest in and rights to personal property, and by levy upon real property and interest in rights to real property" to collect delinquent taxes.
For bank accounts, a warrant of garnishment is to be served "upon the taxpayer and upon the president, manager, treasurer or other responsible officer of the bank."
The bank shall then turn over to the BIR Commissioner "so much of the bank accounts as may be sufficient to satisfy the claim of the Government."
Share:
Newer Post Older Post