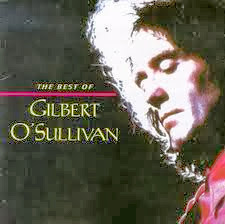 "Alone Again (Naturally)" is a song by Irish singer–songwriter Gilbert O'Sullivan. It was released in 1972 on the album, Back to Front, and in total spent six weeks, non-consecutively, at #1 on the United States Billboard Hot 100 singles chart. In Casey Kasem's American 'Top 40 of the 1970s', "Alone Again (Naturally)" ranked as the fifth most-popular song of the decade (Debby Boone's "You Light Up My Life" was #1). "Alone Again (Naturally)" also spent six weeks at number one on the Easy Listening chart. The track reached #3 in the UK Singles Chart. It is an introspective ballad, starting with the singer telling of his plans to commit suicide after being left at the altar, and then telling about the death of his parents. O'Sullivan has said that the song is not autobiographical, as he did not know his father (who died when O'Sullivan was 11) very well, and that his father had mistreated his mother. His mother was not dead at the time that his song was written. "Alone Again (Naturally)" is included on O'Sullivan's The Berry Vest of Gilbert O'Sullivan album (2004) on the EMI record label. Big Jim Sullivan plays the guitar break in the original recorded version of the song. The landmark 1991 copyright case Grand Upright Music, Ltd. v. Warner Bros. Records Inc. centered on the unauthorized use of a sample from "Alone Again (Naturally)" by rapper Biz Markie.
Share:
Newer Post Older Post