A Week After Typhoon Haiyan Hit, Grim Realities Sink In 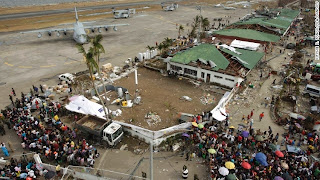 Tacloban, Philippines  -- A mother mourns the deaths of children who slipped from her grasp. A father says he's contemplated suicide. A family prepares to rebuild.

A week after Typhoon Haiyan tore through the Philippines, the adrenaline-fueled response to the storm and its aftermath have faded from the streets of Tacloban. Now, the grim realities of daily life have taken its place.
Juvelyn Taniega is trying to keep busy. She's collected old dishes and is cleaning them up, crouching on the ground near the spot where her home once stood and the place where she last saw her husband and six children alive.
She's found the bodies of three of her children, but three of them are still missing. In days, she said, no one has come to help.
"My children are decomposing," she said.
In other parts of the storm-ravaged city, help has arrived. Trucks carry food. Crews clean up debris. Workers line up bodies to be identified by families who've been searching for their loved ones.
Humanitarian workers and military troops from around the world have converged on the Eastern Philippines, racing against time to rescue and feed those devastated by the storm.
The horror is everywhere thanks to what was Super Typhoon Haiyan when it came ashore a week ago ago, packing winds 3.5 times as strong as Hurricane Katrina, pushing in a wall of water 15 feet high and washing away towns on many islands.
The official nationwide death toll from the typhoon had increased to 2,360 by Friday morning. Other reports suggested the toll could be far higher, with thousands feared dead in Tacloban alone.
The deadly storm left more than 3,850 injured and at least 77 people reported missing across the Philippines, officials said.
Reaching all the victims and assisting the survivors -- including more than 2 million people in need of food, according to the Philippines government -- are both priorities now.
Share:
Newer Post Older Post