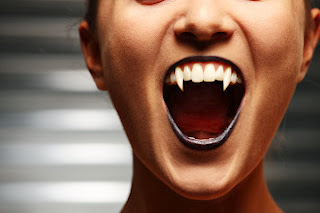 Vampires, werewolves, and zombies are known to be mythical characters and most people get to see them only on two occasions: in the movies or in costume parties on Halloween.

Psychiatrists like me however get the real deal—a face-to-face encounter with these “creatures” in the clinic.
Yes, true-to-life vampires, werewolves, and zombies do exist and they actually consult psychiatrists!

What is clinical vampirism?

Self-cutters drink their own blood
The few vampires I’ve met are adolescent or young adult “self-cutters” who lap up their own blood after cutting themselves.
For some of these vampires, the act of lapping up or drinking blood is done with an intimate partner and is associated with sexual arousal.

In extreme cases, real life vampires are known to level up in their vampiric activities.
Glamorizing vampirism

From self-cutting, they advance to more complicated acts such as acquiring blood from butchers and blood banks, engaging in vampiric rituals or committing hideous crimes which involve the murder of animals and even human beings for their blood.

People who think they're werewolves often suffer from schizophrenia.
Real life werewolves are people afflicted with the psychiatric disorder known as clinical lycanthropy.
“Lycanthrope” is the Greek word for “wolf-man” and lycanthropy refers to the delusional belief that one has become a wolf or can transform into a wolf.
Real life werewolves expectedly behave as wolves do and commonly howl at the moon, particularly when it is full. A popular example of a person with clinical lycanthropy is King Nebuchadnezzar of the Bible who lost his mind and lived in the wilds, behaving like an animal.
Lycanthropy is usually a manifestation of schizophrenia.
The ‘walking corpse’ syndrome

Real-life zombies believe they've lost their internal organs.
As for real life zombies, they are people who suffer from Cotard’s syndrome or the walking corpse syndrome.
People with Cotard’s syndrome have the delusional belief that they are already dead, or decaying or have lost their internal organs.
One real-life zombie patient of mine, for instance, had the belief that he didn’t have any organs inside him and therefore had a hollow body.
Cotard’s syndrome may be caused by schizophrenia, neurological disorders and, surprisingly, the antiviral medication called Acyclovir.

Compassion for the living ‘undead’
In the movies or on TV, vampires, werewolves, or zombies are mercilessly annihilated through silver bullets, stakes driven through their heart or through exhumation.
Clinical vampires, werewolves and zombies, on the other hand, are real-life human beings who need compassionate understanding and psychiatric treatment in the forms of medication and psychotherapy.
Share:
Newer Post Older Post