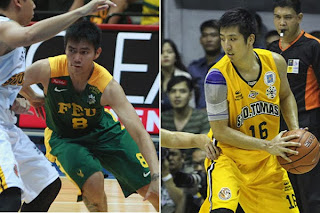 This year’s PBA rookie draft just got a little deeper.

With highly-coveted big men Greg Slaughter of Ateneo, San Sebastian’s Ian Sangalang and lanky Raymond Almazan of Letran having made themselves available earlier, University of Santo Tomas gunner Jeric Teng and RR Garcia of Far Eastern U have also threw their hats in the rich pool of aspirants who are raring to bring their act to the pro ranks.

The 6-foot-2 Teng and the 5-foot-10 Garcia submitted their respective application forms last Wednesday bringing to nearly 70 the number of hopefuls who have registered for the annual rookie draft set on Nov. 3 at the Robinson’s Place Manila.

While most of the attention is focused on the 7-foot Slaughter, 6-foot-6 Sangalang and the 6-foot-7 Almazan, the entry of Teng and Garcia clearly gives pro league squads additional options in the backcourt.

Teng, 22, stood tall in the Growling Tigers’ campaign in the recent UAAP Season 76 men’s cage wars where they finished a fighting second to the favored La Salle Green Archers following an epic best-of-three finals showdown.
Despite being hobbled by shoulder and hamstring injuries in the eliminations, the eldest son of former pro league cager Alvin Teng emerged as the second-best scorer for UST with 14.9 points on top of 4.7 rebounds and 1.9 assists in 15 outings.

For his part, Garcia, a member of the national team cadet pool, had to get the green light first from the top brass of Gilas Pilipinas, in particular national men’s team coach Chot Reyes, before submitting his application.

A proud native of Zamboanga, Garcia was named the UAAP MVP in 2010 and provided enough support in FEU’s return to the Final Four this year, averaging 12.8 points, 3.9 rebounds and 3.1 assists in 15 games.