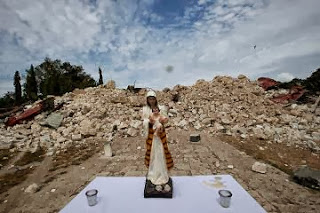 Survivors of a powerful earthquake that killed more than 150 people in the Visayas rummaged Wednesday through ruins for friends and relatives, as rescue workers struggled to reach isolated communities.

The 7.2-magnitude earthquake struck the central island of Bohol on Tuesday morning, ripping apart bridges, tearing down centuries-old churches and triggering landslides that engulfed entire homes.
The number of people confirmed killed on Bohol and neighboring provinces climbed from 93 on Tuesday to 158 on Thursday as the full scale of the disaster became clear, and there were no tales of miracle rescues.
At Loon, a small coastal town of about 40,000 people just 20 kilometers (12 miles) from the epicenter of the earthquake, shocked survivors used their bare hands to scour through the rubble of their homes.
"We're trying our best to keep hopes up, but in this desperate situation there is nothing much we can do beyond giving comforting words," local priest Father Tomas Balakayo told AFP as he stood in front of Loon's destroyed limestone church.
"I try to be strong but this is terrible, what have these people done to deserve this?"
Loon farmer Serafin Megallen said he dug with his hands, brick-by-brick, to retrieve his mother-in-law and cousin from the rubble of their home on Tuesday.
"They were alive but they died of their injuries three hours later. There was no rescue that came, we had to rely on neighbors for help," he told AFP.
With destroyed bridges, ripped-open roads and power outages fragmenting the island of about one million people, authorities said it had proved difficult for police and government rescue workers to reach isolated communities on Wednesday.
Loon was one of the most badly affected communities, with 42 people confirmed killed there so far, according to Bohol police chief Senior Superintendent Dennis Agustin.
But for most of Wednesday the only people involved in the search and rescue efforts were local residents and police, with only a few rescue workers arriving by boat, and no heavy equipment that could have plied through the rubble.
Four people were believed to have been inside Loon's Our Lady of Light church when it collapsed, according to Balakayo, the priest.
He said they remained unaccounted for, but locals had given up hope they were still alive.
In front of the rubble of the church an improvised altar had been erected with a lone statue of the Virgin Mary, where teary residents stopped by to make the sign of the cross.
Ten churches, many of them dating back centuries to Spanish colonial rule of the Philippines, were destroyed or badly damaged on Bohol and the neighboring island of Cebu.
Video footage broadcast by AFP on Wednesday showed an elderly woman narrowly avoiding being crushed by the collapsing bell tower of the Philippines' oldest church, Cebu's Basilica Minore de Santo Niño (Basilica of the Child Jesus).

A report by Mariz Umali on "News To Go" Thursday morning said a team from the National Commission on the Culture and Arts (NCCA) is already in Bohol to inspect the damaged churches there, focusing on those declared six national cultural treasures.

In Cebu, at least 86 classrooms in schools need rehabilitation that may cost up to P83 million, according to state-run Philippine Information Agency.

The PIA said inspections showed cracks on walls and flooring, and "dismantled" parts of the ceiling in affected Cebu schools.
Most of the deaths were on Bohol, which is one of the most popular tourist islands in the Philippines because of its beautiful beaches, rolling Chocolate Hills and tiny tarsier primates.
The number of confirmed fatalities on Bohol jumped to 141 as authorities in isolated towns restored communications and reported dozens more deaths, the head of the province's information office, Augustus Escobia, told AFP.
Nine people died on Cebu province, home to the Philippines' second-biggest city of the same name, while another person was confirmed killed on nearby Siquijor island.
Survivors were further tormented on Wednesday by incessant aftershocks, including some exceeding 5.1, according to national disaster authorities.
President Benigno Aquino visited Bohol and Cebu to oversee rescue efforts, and sought to reassure survivors as the number of aftershocks surpassed 800.
"The bottom line is we do not have to fear that something stronger than... (Tuesday's quake) is coming," Aquino said in a nationally televised meeting with cabinet members at Tagbilaran, Bohol's capital.
The Philippines lies on the so-called Ring of Fire, a vast Pacific Ocean region where many earthquakes and volcanic eruptions occur.
The deadliest recorded natural disaster in the Philippines occurred in 1976, when a tsunami triggered by a 7.9-magnitude earthquake devastated the Moro Gulf on the southern island of Mindanao.
Between 5,000 and 8,000 people were killed, according to official estimates
Share:
Newer Post Older Post