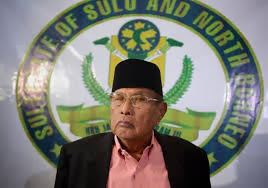 Sultan Jamalul Kiram III, whose followers had engaged Malaysian forces in a confrontation in Sabah earlier this year, died early Sunday at age 75, his daughter said.

Kiram's daughter Jacel Kiram-Hasan said in a radio interview her father had been battling kidney problems.

"He passed away (at) 4 a.m. due to organ failure," she said in an interview on dzBB radio. She said he was confined at the Philippine Heart Center since Thursday.

"My Appah Sultan Jamalul Kiram III has returned to our Creator at around 4:00 in the morning October 20, 2013. Thank you for your prayers and support," she said.

Sultan Kiram ran for senator in 2007 under then President Gloria Arroyo's TEAM Unity but lost.

Despite Kiram's death, his followers will continue efforts to "repossess" Sabah for the Filipino people, the sultanate's spokesman said Sunday.

In a radio interview, Abraham Idjirani said repossessing Sabah for the Philippines was one of the last decrees issued by the sultan before he died early Sunday.

The sultan's two other orders were for his brothers to be closer together, and for their families to unite, he added.

Idjirani said the sultan talked to his two brothers, including Agbimuddin Raja Muda Kiram – who led an armed group to Sabah earlier this year – before he died.

Remains to be flown to Jolo

After failing to secure clearance to transport his remains to Jolo before sundown Sunday, Kiram's relatives have arranged to have his body flown there via private plane between 3 and 4 a.m. Monday, radio dzBB's Divine Caraecle reported.

But only close family members are to take the trip to Jolo as the plane will be an eight-seater, the report added.

Kiram's relatives were earlier not able to transport the sultan's body to Jolo after failing to get clearance from the Civil Aviation Authority of the Philippines.

Meanwhile, supporters continued to go to the Blue Mosque in Taguig City to pay their last respects.

In February this year, followers of the Sultanate of Sulu engaged Malaysian forces in Sabah in an effort to assert their claim on what they call their ancestral territory.

Based in Mindanao, the Islamic sultanate once controlled Sabah in northern Borneo, including the site of the stand-off. Until now, the sultanate's heirs have been receiving a nominal yearly compensation package from Malaysia under a long-standing agreement for possession of Sabah.