San Mig Past Petron,Tied Series at 2-2 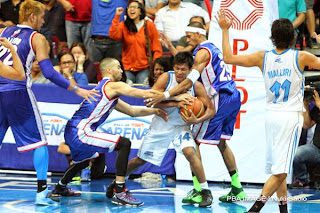 dream start nearly ended in a nightmarish finish for the San Mig Coffee Mixers in Game 4 Friday night.
And all because a 28-point deficit wasn’t enough to bring down the Petron Blaze Boosters.
The Mixers survived a fourth quarter collapse in nipping the Boosters, 88-86, and levelling at 2-2 the PLDT-Telpad PBA Governors’ Cup Finals at the Mall of Asia Arena.
Late-game free throws from Mark Barroca, PJ Simon and Alex Mallari were needed to finally put down the Boosters who were ahead, 77-73, on tip-ins by Elijah Millsap and June Mar Fajardo halfway in the fourth and appeared on the way to completing one of the biggest comebacks in Finals history.
But Barroca had 7 of his 12 points and Marc Pingris 6 of his 15 in the last period and San Mig weathered the biggest storm that came their way this conference.
“A one-point win is the same as a 30-point win,” said San Mig coach Tim Cone. “We were just trying very hard in the fourth quarter and saying we can’t regret losing that lead.”
Cone marvelled at how “quickly” the Boosters were able to overhaul the Mixers’ advantage.
“That’s how explosive they are,” he said. “I’m just glad to be two-two at this point. We’re looking forward to Sunday
Game 5 is at the Smart Araneta Coliseum.
Petron took Game 1 but San Mig battled back to tie the best-of-7 series. The Boosters then went up, 2-1, with that blowout win in Game 3.
Gee Abanilla, the Petron coach, admitted they still had one timeout left when Marcio Lassiter got possession with about three seconds left.
“Pero nagkagulo na e. Charge to experience na lang,” Abanilla said. “This is a game we should learn from. We managed to catch up from that big lead but fell to bad breaks in the end.”
None was bigger than the inbounds turnover committed by MVP winner Arwind Santos with 21 seconds left and San Mig ahead, 85-83.
The errant pass, coming off a Petron timeout, set up Simon for two free throws that made it a four-point Mixers lead. Petron import Elijah Millsap completed a 3-point play off an alley-oop pass from Lassiter, 87-86, and the Boosters caught the biggest break of the evening when James Yap missed two free throws with 9.5 seconds remaining.
But Marqus Blakely, who missed 10 of 18 free throw and was 5 of 12 from the floor, made his biggest contribution to San Mig’s cause, tying up Millsap and then beating him to the jump.
The ball went to Mallari and Ronald Tubid gave up his sixth foul. Mallari split his charities and Lassiter was unable to call a timeout after corralling the missed second free throw and San Mig had its huge escape.
The nerve-wracking finish was nowhere evident at the start of the game.
As if on revenge mode, the Mixers spilled the Boosters all over the floor right in the first quarter, hitting 73 percent of their shots in opening a 33-13 lead.
San Mig took the half, 52-29, with Blakely scoring 11 of his 13 points in the first quarter and Joe Devance and James Yap sharing 18.
Millsap, unstoppable with 28 points two nights ago, couldn’t buy a basket this time with his 3 of 9 shooting in the first 24 minutes underscoring the Boosters’ offensive woes
The Mixers also had 12 turnover points in the first quarter alone compared to the Boosters’ 4.
With Blakely going 4 of 5 with a 3-pointer and 2 of 3 from the free throw line, the Mixers went 14 of 19 in their fightback to avert falling into a 3-1 hole.
They controlled the boards, 12-7, and had 10 assists against Petron’s 3, showing off a well-rounded game on both ends.
Petron, in contrast, missed 13 of 19 shots (31 percent) and couldn’t get anything from its usually prolific import.
But the Boosters weren’t the best team in the elimination round for nothing.
Behind Millsap, who outscored the entire San Mig team, 17 to 15 in the third, Petron rallied from a 49-21 deficit in the second period to come within 67-63 going to the final 12 minutes.
The furious third was marred by a bloody mouth suffered by San Mig’s Mark Barroca who took an elbow from Millsap while keeping a tight defensive watch on the Boosters import.
Petron took the third, 34-15, and dominated the boards, 21-9.
Millsap unloaded 33 points, 10 in the fourth, while Fajardo became the first rookie since Eric Menk of Tanduay in 1999 to post a 20-20 game, with 20 points and 26 rebounds.
Fajardo came within three rebounds of matching the longest-standing PBA record set by the late Marcelo Simbulan with 7-Up back in 1975, the league’s inaugural season, when he recorded 29 boards against Carrier. (WJRHT)
Scores:
SAN MIG 88 – Blakely 19, Pingris 15, Yap 14, Barroca 12, Simon 12, Devance 11, Mallari 4, Reavis 1.
PETRON 86 – Millsap 33, Fajardo 20, Lassiter 13, Santos 8, Lutz 6, Kramer 2, Miranda 2, Tubid 2, Deutchman 0, Lanete 0, Hubalde 0.
Quarters: 33-13, 52-29, 67-63, 88-86
Share:
Newer Post Older Post