San MIg Coffee One Win Away To The Finals 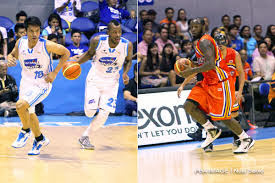 Meralco Bolts coach Ryan Gregorio gave two reasons why it was difficult to beat San Mig Coffee in Game 3 of their PBA Governors’ Cup semifinal series Friday night.
“It’s really hard to win without an import,” Gregorio said during the post-game interview after the 94-87 loss to the Mixers at the Smart Araneta Coliseum, the words coming out easily.
The second reason was a bit of a struggle though as he apparently contemplated the consequences.
Then he gritted his teeth and got it off his chest.
“And it gets so much harder when you get called 35 times and your opponent gets 41 free throws,” he said, stressing the figures.
For the record, San Mig got whistled for 19 fouls and gave up 22 free throws, a disparity Gregorio harped on.
Still, even without West, who suffered a sprained right shoulder after a hard bump by Joe Devance eight minutes into the third quarter, the Bolts had it in them to post an upset.
But they missed 6 of 9 three-point attempts in the fourth quarter when the Mixers were asserting their import advantage with Marqus Blakely, who had 21 points, 22 rebounds and went 12 of 19 from the foul line.
“Everybody thinks it’s easy but the game becomes so much harder when one plays a team that suddenly loses its import,” said San Mig coach Tim Cone. “One becomes the heavy favorite and the other an underdog. They gain a momentum that’s really hard to break.”
A 4-point play by John Wilson kept the Bolts within 90-87, with 26 seconds left. But Alex Mallari, who scored a career-high 23 points, hit two free throws to help seal the win for San Mig.
Mallari nailed a big 3-pointer with 2:38 left to give San Mig an 84-79 lead. Consecutive baskets by Mark Barroca and James Yap then made it a 9-point advantage with 1:40 left.
“We lost our import in the third with a kind of foul that I know is not intentional but still is something you don’t want to see happen,” said Gregorio. “Mario’s kinda upset because it was an obvious bump.”
West wasn’t the only one unhappy.
“I told Devance after the game that it’s all part of the game, but, of course, the damage has been done,” said Gregorio, hinting the Bolts could go without an import in Game 4 if West’s injury turns out to be serious.
“The schedule is too tight,” he said. “Physically, you can’t fly in anyone.”
West is scheduled for MRI tests Saturday morning at 9.
Gregorio coached the core of the San Mig team when it was still carrying the Purefoods brand. Devance, however, joined James Yap, Marc Pingris and Co. only after Gregorio had left to handle Meralco and Cone had stepped in from Alaska last season.
San Mig trailed late in the first quarter, 22-13, and 27-17, early in the second, 27-17, before rallying behind hot-shooting Mark Barroca and a more aggressive inside attack to take a 44-42 edge at halftime.
Blakely had 13 points in the first two quarter and Alex Mallari came off the bench for 10 on 5 of 7 from the floor.
The Mixers missed 9 of 21 free throws but recovered the loss under the glass, 29-19, including 11-5 in offensive rebounds which gave them five more field goal attempts.
San Mig is eyeing its 24th final appearance; Meralco its first. (WJRHT)
Scores:
SAN MIG 94 – Mallari 23, Blakely 21, Barroca 18, Yap 13, Devance 7, Pingris 4, Reavis 4, Acuna 2, Simon 2.
MERALCO 87 – Cortez 15, West 13, Wilson 13, Hodge 11, Hugnatan 11, Dillinger 10, Salvacion 9, Cardona 3, Reyes 2, Guevarra 0, Ross 0.
Quarters: 17-22, 44-42, 66-64, 94-87.