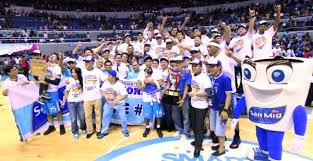 TIM Cone and his San Mig Coffee team would not be denied this time.
The Mixers banked on the gutsy plays of Marqus Blakely and Marc Pingris down the stretch to repulse Petron Blaze, 87-77, Friday and bag the PBA Governors’ Cup crown at the Smart Araneta Coliseum.
The two combined for half of San Mig’s 22 points in the fourth period and Pingris added five rebounds and two of his total five blocks to stand tallest and help the team cop the crown that was denied them last year by Rain or Shine.
At the same time, Cone moved alongside the legendary Virgilio “Baby” Dalupan as the league’s winningest with his 15th title.
“Incredibly humbling,” said Cone of his coaching idol, who won his last championship with Purefoods in the 1990 Third Conference, ironically against Cone’s Alaska squad.
“My first finals was against him and he won his last championship against me. We were up, 2-0, in a best-of-five and he swept me in the last three games,” reminisced Cone.
Not this time, with a gritty crew led by Blakely and Pingris.
Blakely finished with 19 points and 13 rebounds and Pingris 19 and 17 to be adjudged as the Papa John’s Pizza-PBA Press Corps Finals MVP with averages of 12.5 points, 8.5, 3.0 assists and 1.0 blocks in the series.
Elijah Millsap scored a gamehigh 25 points and June Mar Fajardo 20 along with 15 boards, but only Marcio Lassiter was the lone other Petron player in double digits with 11.
As a team, the Boosters made just five of 20 field goal tries in the decisive period compared to the Mixers’ more efficient 7-for-13 clip. Cone’s charges also dominated the boards 57-46.
PJ Simon, Joe Devance and Mark Barroca chipped in their share for San Mig as the franchise formerly known as Purefoods finally followed up its tournament victory in 2002, again against Cone’s Aces.
Cone admitted he mostly let his guys do their stuff.
“I have to admit I did very little coaching in the last couple of games,” related Cone. “I just stepped back and told the guys, ‘This is yours.’
“They did not play perfect basketball, but they played with perfect effort.”
In a deciding game that fittingly had 14 lead changes and 10 deadlocks, nothing less was needed and the Mixers did not lack in that area, especially after Petron came clawing back from a 65-74 deficit to stay within three, the last at 77-80.
But Blakely scored on an undergoal stab and pulled off a steal off Millsap that resulted in Pingris’ own charity that would unwittingly spark San Mig’s endgame surge.
Pingris would pull off another block on Millsap and emulate Mark Barroca’s two charities, making it a very safe 10-point spread, only 14.1 seconds left, as the Mixers fans making up most of the 21,319 paying fans erupted into full celebration. (NC)
The scores:
San Mig Coffee 87 – Blakely 19, Pingris 19, Simon 16, Devance 11, Barroca 10, Yap 8, Mallari 2, De Ocampo 2.
Petron 77 – Millsap 25, Fajardo 20, Lassiter 11, Cabagnot 8, Santos 7, Lutz 4, Kramer 2, Deutchman 0, Tubid 0.
Quarters: 19-19, 41-39, 65-61, 87-77
Share:
Newer Post Older Post