San MIg Coffe Into The Finals Once Again 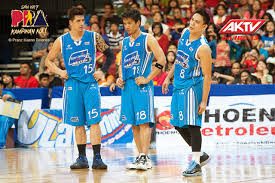 Marqus Blakey outworked just about everybody as San Mig Coffee eventually delivered the knockout blow on Meralco, 79-73, and gained rare back-to-back finals in the PBA Governors’ Cup Sunday night at the Smart Araneta Coliseum.
Blakely put in another solid all-around numbers, including two big plays in the crunch sealing their 3-1 victory over the Bolts in their best-of-five semifinals series.
The Mixers play either the Petron Blaze Boosters or the Rain or Shine Elasto Painters in a best-of-seven title playoff beginning Friday at the Mall of Asia Arena in Pasay City.
“We don’t know how to make it easy. We always make it hard for ourselves,” said San Mig Coffee coach Tim Cone after they eventually squeezed through in their tough semis series.
“We just had more horses, and they ran into bad lucks with Mario West getting injured,” Cone also said.
Blakely was a thoroughbred making a great ride throughout the series.
In the eventual Game Four, he delivered 23 points, 19 rebounds, five steals, two assists and one block against three errors in 43 minutes of play.
He dished off an assist, grabbed an offensive rebound and knocked in two charities in the final 25 seconds to personally scuttle Meralco’s bid.
The Bolts had come to within a basket, 73-75, when Blakely spotted a defensive lapse by Ross, dishing off to Barroca for a basket underneath making it 77-73 with time down to 23.2 seconds.
Blakely a little later grabbed a big offensive carom and sank in two charities as the Mixers secured a 24th finals in the history of their franchise.
“We led by 10 almost throughout the fourth then we allowed them to get back,” rued Cone.
Though playing with an injured right shoulder, West stood at the forefront of Meralco’s tough challenge.
West, Macmac Cardona and Reynel Hugnatan fuelled Meralco’s endgame charge getting the team back in the thick of the fight after falling behind by as many as 16 at 46-62.
The Mixers enjoyed double-digit spreads right in the opening quarter as the Bolts started flat, unable to score a basket in the first four minutes of the game.
West, obviously trying to protect his injured shoulder, scored his first basket with already 14 minutes into the contest.
Blakely fired 13 in the opening canto and had piled up 17 markers, 11 rebounds, four steals and one assist against three turnovers by the half.
He grabbed a loose ball and executed a two-handed reversed jam at the buzzer as the Mixers made it 45-38 after the first two quarters. (SB)
The scores:
San Mig 79 – Blakely 23, Yap 19, Pingris 16, Barroca 7, Mallari 4, Devance 4, Acuna 3, Simon 3, Reavis 0.
Meralco 73 – West 22, Cardona 13, Hugnatan 13, Ross 9, Dillinger 6, Salvacion 6, Cortez 4, Hodge 0, Wilson 0,
Quarters: 27-16, 45-38, 66-56, 79-73
Share:
Newer Post Older Post