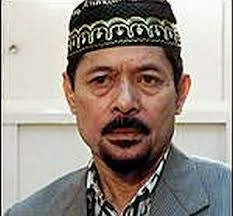 In an interview with DZMM, PNP Region 9 spokesperson Chief Insp. Arile Huesca said a Zamboanga court already issued a search warrant for Misuari’s home to help the police find evidence that will link the chairman to the Zamboanga standoff.
Authorities raided the home of Misuari in Barangay San Roque, Zamboanga City Friday morning but Misuari and his family were not inside the house.

In a report by RJ Rosalado, authorities found some pieces of evidence but did not identify them. Huesca said they will submit the evidence to the Justice Department before making them public.
Skirmishes between government troops and armed men which started since September 9 lasted for around 3 weeks and left more than 200 people dead.

Misuari and Malik also face a complaint for the violation of the Republic Act 9851 which penalizes crimes against International Humanitarian Law.

Meanwhile, Zamboanga City Mayor Beng Climaco said the government must still hold talks with the MNLF despite the standoff.

Those in the MNLF who still want to pursue peace in Mindanao should be heard, Climaco explained in an interview with ANC.
Share:
Newer Post Older Post