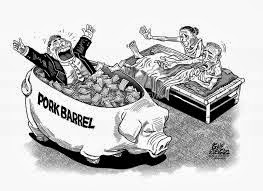 On his own, the President cannot abolish the pork barrel.
This was the statement of Associate Justice Antonio Carpio on Thursday during the second oral arguments on the constitutionality of the lawmakers’ discretionary fund.

The most senior justice of the Supreme Court explained that the Priority Development Assistance Fund (PDAF), as the pork barrel is formally called, can only be abolished if the Congress passes a law to repeal it, or the High Court declares it unconstitutional.
“At most, the President has the power to suspend further expenditure if there are anomalies. The president has the power to stop and investigate,” he said. “He has no legal power to abolish PDAF.”
Solicitor General Francis Jardeleza concurred, noting that the President “has a general power to stop releases.”
Earlier at the oral arguments, the Solicitor General asked the Supreme Court to lift the temporary restraining order on PDAF and to let the political branch of government to solve the issue on its own.

However, Carpio replied that it was the High Court’s duty to resolve the case at hand. “A judicial review is a duty of the Judiciary to strike down any branch of government [that has performed] abuse of discretion… We have taken an oath… You are asking too much from this Court, counsel.”
By November, the High Court will decide on PDAF’s constitutionality.

Last August, Aquino suspended releases of lawmakers’ pork barrel amid public outrage on the alleged P10-billion pork barrel scam. In a later press briefing, he said it was time to abolish the PDAF, in a departure from his earlier statements.

Aquino's declaration came days before a mass gathering against the PDAF was held in Luneta Park.
The pork barrel has been in the spotlight recently after an alleged scam funneling billions from lawmakers' funds into bogus NGOs surfaced. The supposed mastermind of the scam, businesswoman Janet Lim-Napoles, is currently detained on the charge of serious illegal detention.
Share:
Newer Post Older Post