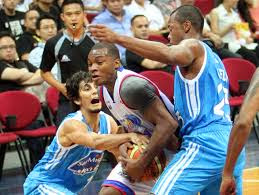 The Petron Blaze Boosters took game one of the 2013 PBA Governors’ Cup Finals with a 100-84 win over the San Mig Coffee Mixers, Friday at the MOA Arena. The Boosters started the payoff period down by two points, but they exploded for 41 markers in the final quarter to take the first game in dominant fashion.

Import Elijah Millsap had another explosive performance as he posted a triple-double with 35 points, 10 rebounds, and 10 assists. Arwind Santos backed him up with 16 points, but the Best Player of the Conference contender transformed into his team’s most vocal cheer leader in the fourth quarter as he watched his teammates put the Mixers away.

“We’re very happy about this win. We played a great fourth quarter,” said Petron head coach Gee Abanilla. “This win, although it boosts our confidence, it means nothing right now. It’s a long series and we need to keep grinding.

“It was a total team effort for us,” added Abanilla. Indeed, six Boosters scored in double-digits while only four Mixers managed to get there. The Boosters also did a tremendous job defending James Yap, who was limited to just eight points. Yap scored all of his points in the fourth quarter when the Mixers were already facing a huge deficit.

Marc Pingris opened the Finals by scoring over Elijah Millsap. The Petron import however quickly knotted the game at 2-all with a long jumper. The Boosters then got baskets off San Mig turnovers to lead 8-4, before Arwind Santos sank back-to-back baseline jumpers to give his Boosters a 12-4 lead with 7:14 left in the first quarter.

Petron connected from outside at the start of the second period, to rebuild their double-digit lead at 30-18, while the Mixers responded by going strong to the hoop. They went on 6-0 run to cut the Boosters' lead in half, 30-24, with still 8:17 left in the period.

The Mixers finally tied the game, 36-all, at the 3:17 mark with a Pingris basket. Petron, however, closed the quarter strong, to lead 41-36 heading into the break.

Millsap led all scorers at the half with 16 points, while Santos shot an outstanding 7-of-9 clip from the field for 14 points. The Mixers, on the other hand, were led by Blakely with 14 points, six rebounds, and three steals.

Petron shot 51.4 percent from the field in the first half while San Mig Coffee only made 40 percent of their shots. The Mixers managed to be only down by five as they got seven more rebounds, leading to more shots at the basket.

A June Mar Fajardo facial on Blakely gave Petron a 51-43 lead in the third quarter, but the Mixers stayed in the game thanks to baskets from PJ Simon and Joe Devance. The duo helped bring the Mixers’ lead down to four, 56-52.

After trailing throughout the third quarter, Blakely tied the game at 57-all with another dunk. Denok Miranda responded with a basket, but Yancy De Ocampo knotted things again with a layup off a pass from Alex Mallari.

The Mixers finally got the lead as Simon sank a jumper with 29 seconds left in the third quarter. They then maintained their advantage heading into the final period, 61-59.

Petron started the final quarter by going on a 7-0 run to build a 66-61 lead. A Lassiter triple was quickly followed by an and-one play from Millsap to give Petron a double-digit lead 77-67 with 5:44 left in the game.

San Mig Coffee head coach Cone was called for a technical foul as he vehemently complained after a no-call on Cabagnot's baseline bump on Blakely. Lassiter made them pay by making another triple for a 85-72 Petron lead. Triples from Cabagnot and Chris Lutz then put the game away for Petron as they led by 14 with lead than two minutes left in the game.

“I was also surprised,” Abanilla said regarding his team's fourth-quarter explosion. “We established June Mar [Fajardo] inside and maybe they focused too much on defending us inside.”

“They got rolling with their three-point shooting. We broke down early in the fourth. We allowed them to get a run and they just rolled with it,” said San Mig Coffee head coach Tim Cone. “We just have to play a lot harder, a lot more effort. We played like we were satisfied tonight, like we were happy to just be in the Finals.”

James Yap's eight points came on a 2-of-9 shooting clip. The backcourt pair of Mark Barroca and Alex Mallari were equally frustrated with just eight points between the two of them and no three-pointers.

Petron turned 18 San Mig Coffee miscues into 21 turnover points, compared to just eight by the Mixers. In response, SMC boasted of a 16-2 edge in second-chance points, thanks to a 16-9 difference in offensive caroms.