P1K Per Vote In Some Barangays A Prelude To 2016 Elections, Poll Observers Say 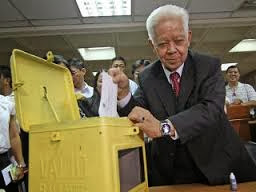 In reported instances of vote-buying across the country, politicians paid up to P1,000 for each vote to ensure loyal allies at the barangay level—a move seen as part of the building of political machinery for the 2016 presidential elections, poll observers said Tuesday.

Political analyst Ramon Casiple said that votes cast for positions in the country's smallest political units can have an effect in the elections for the next president.

"Remember that a mayor only becomes relevant kung maraming sumusuporta sa kanyang mga kapitan. 'Yung congressman, nagiging relevant naman siya kung marami siyang supporters na mayors. This is how the barangay elections have an impact on national positions. There is a snowball effect," she said in a separate interview.

Caritos also suggested that some of the vote-buying instances in the recent polls were "self-funded," while in other cases higher officials "intervened" for their own benefit.

On Monday, Filipino voters cast their votes for over 42,000 barangay captains and almost 300,000 barangay council members. Although the Commission on Elections (Comelec) said the grassroots elections generally went smoothly, incidents of ballot-snatching, shooting and strafing were reported in some areas in the country.

The Omnibus Election Code states that "the barangay election shall be non-partisan and shall be conducted in an expeditious and inexpensive manner."

The law states that a person found guilty of representing a political party or any other organization, which is considered an election offense, will be punished with imprisonment from one to six years, and perpetual disqualification from office.

Under the Omnibus Election Code, vote-buying is committed when a person "gives, offers or promises money or anything of value" to another person "in order to induce anyone or the public in general to vote for or against any candidate or withhold his vote in the election."

Caritos said that based on the frequency of reports her group has been receiving so far, vote-buying during the recently concluded barangay elections was definitely "more widespread" compared to 2010, though she was not able to provide actual numbers.

Commission on Elections (Comelec) Chairman Sixto Brillantes Jr. acknowledged that vote-buying occurred during the barangay polls, but asserted that it was not that rampant.

He added that there were only a few incidents overall, compared to the number of candidates and barangays.

“Kokonti lang naman talaga ang mga incidents. There are 42,000 barangays, there are over 800,000 candidates all over,” he also said.

A video from an unspecified area also showed another candidate talking to voters who were gathered in his residential compound, supposedly to receive P300 each.

Aside from the distribution of actual cash, the PPCRV noted other novel forms of bribery during the recently concluded polls.