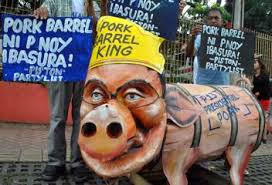 Three out of five Filipinos believe the alleged misuse of pork barrel funds remains a reality even during President Benigno Aquino III's term, according to the results of a Pulse Asia survey released Monday.

The survey was conducted from September 14 to 27, 2013, around the same time plunder and malversation charges were filed against Senators Ramon Bong Revilla Jr., Juan Ponce Enrile, Jinggoy Estrada, and two former members of the House of Representatives along with alleged pork barrel scam mastermind Janet Lim-Napoles.

They were accused of diverting some P10 billion in government money to questionable non-government organizations and ghost projects linked to Napoles during the Arroyo administration.

"Majority opinion among Filipinos (67%) is that the misuse of the PDAF continues to happen under the Aquino administration," the survey said. This view is "shared by most Filipinos across geographic areas (66% to 69%) and socio-economic groupings (65% to 78%)."

The same survey said 63 percent of Filipinos are in favor of Aquino's announcement to abolish the PDAF.

"Most Filipinos approve of President Aquino’s declaration that, 'Panahon na upang i-abolish ang PDAF.' This sentiment is echoed by majorities in every geographic area (60% to 65%) and socio-economic grouping (63% to 68%)," the survey said.

The results came out on the same day as the new survey by pollster Social Weather Stations that showed President Aquino's satisfaction scores dropped to "good" in September from "very good" in June.

Malacañang blamed the drop in Aquino's ratings to allegations of government fund misuse involving former and incumbent officials and lawmakers.

The Pulse Asia survey was conducted among 1,200 respondents aged 18 years and above.

Almost 90 percent of the respondents said they have heard, watched and read news about the pork barrel scam, the Pulse Asia report said, a leap from only 66 percent of Filipinos in October 2004 who said they knew about PDAF.

At least 14 percent disapproved of Aquino's announcement in abolishing PDAF, according to the report.

Meanwhile, only three out of 10 Filipinos believe the misuse stopped during Aquino's term.

One in every three Filipinos said the pork barrel system was used by politicians to get elected into office, while 27 percent said it was used for bribes and kickbacks
Share:
Newer Post Older Post