Mars Could Be Key for Martian Colony 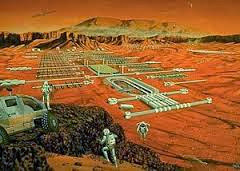 Mars pioneers could use 3D printing to create a sustainable human colony on the Red Planet, advocates say.

A team of scientists is developing a plan to use 3D printing to build locally made houses and food on the Martian surface. These resources would support the lives of people leaving the confines of Earth for the Red Planet.

To make things out of Martian raw materials, however, the first arrivals will need to bring some equipment. Once settlers put industrial cutters and 3D printers in place, subsequent visitors could start making a variety of objects needed for shelters, greenhouses and even parts for new 3D printers built on the Red Planet, said Bruce Mackenzie, founder of the Mars Foundation, an organization that aims to build and operate the first permanent settlement on Mars. [3D Printing in Space: A New Dimension (Photos)]

"The key for living on Mars is to use the raw materials that are already there," Mackenzie told the crowd at the 2013 World Maker Faire, a celebration of DIY science, technology and engineering, here on Sept. 22.

Officials with the Mars Foundation hope to one day manufacture a Martian pipeline that can run, construct and even duplicate itself, using only local materials on Mars.

The Martian building venture, called the Mars Homestead Project, is already somewhat underway. Engineers working with the Mars Foundation have examined a variety of plans, including those that explore how to manufacture oxygen and methane, the gases and fuels needed to craft plastics like polyethylene, polyester and epoxy.

"From the raw material already found on Mars, we can make plastics," Mackenzie said, adding that the ability to manufacture plastic would make it possible to start building a low-cost base. The different types of plastic could then serve various purposes. They could be made into pipes for irrigating a greenhouse or used to 3D-print gears that would then go into another 3D printer, Mackenzie said.

The researchers have plans to make other materials, too. Martian sand could be used to print fiberglass and cement, while greenhouse-grown corn and potato starch could go into lighter objects like spoons, saltshakers and virtually any household item
Share:
Newer Post Older Post