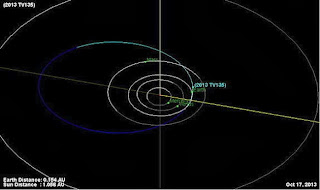 No, a giant asteroid is not about to hit the Earth

NASA has gone out of its way to reassure the public that reports of a massive asteroid headed toward Earth are greatly exaggerated.
In a post entitled “Reality Check,” NASA says that the giant asteroid, first spotted by Ukranian scientists, poses almost zero risk of impacting the Earth.
Specifically, NASA says the odds are about 1 in 63,000 that the asteroid, named TV135, will impact the Earth. On the Torino Impact Hazard Scale, it’s listed as a 1 out of possible 10, or “no unusual level of danger."
"To put it another way, that puts the current probability of no impact in 2032 at about 99.998 percent," Don Yeomans, manager of NASA's Near-Earth Object Program Office at the Jet Propulsion Laboratory, said in a statement. "This is a relatively new discovery. With more observations, I fully expect we will be able to significantly reduce, or rule out entirely, any impact probability for the foreseeable future."
Yeomans is the world’s preeminent “asteroid hunter,” and one of his regular duties is stepping up to shoot down unfounded hysteria about asteroids.
He was forced to speak up after Russian Deputy Premier Dmitry Rogozin caused a stir this week when he wrote on his Twitter account, "A 400-metre asteroid is threatening to blow up the Earth."
In an August interview with Yahoo News, Yeomans explained that NASA typically spots a potentially dangerous asteroid up to 100 years before it would potentially hit the Earth.
TV135 is estimated to be about 400 meters in diameter. For some context, Yeomans says that an asteroid about 30 meters in diameter could cause real damage upon impact. But that’s still far from an extinction-level event. The asteroid that most scientists believe wiped out the dinosaurs is believed to have been 6 miles, or nearly 10,000 meters, in diameter.
Yeomans says there are about 1,000 “Near Earth Objects” in the galaxy that would cause catastrophic damage if they impacted the Earth and that NASA has already identified an estimated 95 percent of them. In other words, the chance that a giant, lethal asteroid would suddenly manifest itself just outside of Earth’s orbit is infinitesimally small.
That said, NASA believes we’re technically due for a major asteroid impact. By their best estimates, a major impact has happened on Earth about once every 100 million years.
But even if scientists do spot a giant asteroid headed our way, they are multiple solutions to the problem.
First, Yeomans says, we would simply launch a spacecraft or rocket into the asteroid to alter its trajectory. Even changing an asteroid or comet’s path by just a few inches would be enough to ensure that it missed Earth by a wide margin so long as the course was altered far enough out in space.
In fact, given enough notice, it may not even take a forceful impact to send an asteroid out of harm’s way. In 2012, MIT students said that if they could spot a giant asteroid 20 years before it reached Earth, simply spraying the asteroid with paintballs would get the job done .
And in a true emergency scenario where an asteroid was too close for its course to be altered, there are still options. In the early 1960s, students at MIT suggested that the best course of action would be to launch a nuclear missile into an asteroid, causing it to break up. If any fragments of the asteroid still made it to Earth, they’d be greatly reduced in size after traveling through the Earth’s atmosphere, and the impact would be minimal.
Share:
Newer Post Older Post