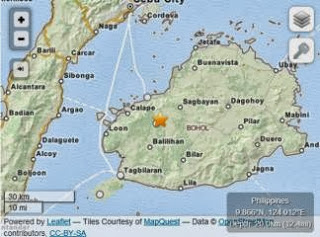 Anonang, Bohol – Right after the October 15 earthquake that laid waste to much of Bohol, residents of this remote northern barangay noticed a long earthen wall that suddenly appeared in their community.

A team of state volcanologists confirmed on Monday night that the newly formed natural structure represents a previously unknown fault that triggered the magnitude 7.2 earthquake.

“When we saw it, eureka! This is it,” said Dr. Teresito Bacolcol, the scientist who led the Phivolcs team on Monday to check out sightings of the lengthy earthen wall, which turned out to be the “face” of a fault that currently does not exist on the active fault map of the Philippines.

“We are 100 percent sure that this is the generator [of the earthquake],” said Bacolcol, citing its proximity to the epicenter near the boundary between Sagbayan and Catigbian towns.

The wall, or the face of the fault, is the edge of a large area of land that had been thrust upwards as high as three meters, and stretched as far as the eyes can see, cutting off roads and numerous trails.

The prominent formation is unique in the annals of the country's recent geological history. It’s considered a “reverse fault” because of the vertical surface rupture. Less powerful quakes cause land to sink rather than rise.

The last great earthquake in the country, in northern Luzon in 1990, was caused by a lateral (side to side) movement of a fault, and did not leave a similarly large mark on the terrain.

Bacolcol and his team of experts had been looking for the fault’s face for days, narrowing their search to the vast “zone of aftershocks” that stretched from the northwest of the island down to the southern coastal town of Loon, where a centuries-old church was reduced to a heap of rubble.

If they had not found the fault, the Phivolcs team would have determined the fault line only by analyzing the pattern of aftershocks, according to a member of the team, adding that “it would have taken a lot longer.”

Following a lead given by this reporter, who had accompanied residents of Inabanga town to the fault on Sunday, Bacolcol and his team spent much of Monday documenting a five-kilometer stretch of the fault, and they were far from finished. They are planning to return on Tuesday to trace the fault wherever it led, which could be the sea.

In the meantime, the scientists with their visit to Anonang gave a measure of relief to residents who didn’t know what to make of the massive change to their land. “We have been scared. What if there are more faults to come? Should we leave?” asked Felix Caray, barangay captain of Anonang, one of many communities across Bohol where people are sleeping outdoors out of fear.

Bacolcol’s team assured them that this will be the one and only fault here, and it may be generations before another earthquake occurs. They also advised not to build any homes within five meters of the fault line.

Late Monday night, Bacolcol and his team were still busy preparing maps, data and photos of their new discovery for the Phivolcs central office.

“This is the holy grail of active fault mappers,” said Bacolcol, who will submit their findings for a revision of the Philippine fault map. “Naiiyak kami nang makita namin.”
Share:
Newer Post Older Post